On Easter morning we travelled 58km along the Nimule Road which heads towards the frontier with Uganda. Unfortunately, Mark Boyd could not join us this day. It was immediately noticeable that the habitat was very different with far fewer Acacias. Our first stop was in an open area of grassland with scattered bushes a few km outside of Juba. We saw a number of new species, with Black-winged Bishops distinctive in flight, despite being in non-breeding plumage, and Flappet Larks making their distinctive song flights overhead. We heard a couple of Red-chested Cuckoos calling nearby, but try as we might we had no luck seeing them. This was a great spot for cisticolas and we had the chance to get good looks at several species and sort out their identification. Foxy Cisticolas were common (and never an ID problem); Red-pate, Croaking, and Siffling were also present, the latter being new for both of us. 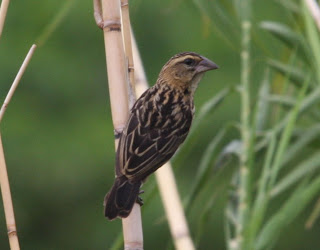 Black-winged Bishop, Nimule Road near Juba 24 April 2011
As we continued along the road the vegetation got a bit thicker and we started to rise a bit in altitude. There were more trees, but mostly in small copses which housed many of the birds. We made several small stops, again with each providing several new species such as Black-bellied Firefinch, African Black-headed Oriole, Chestnut-crowned Sparrow-Weaver, Bronze-tailed Starling, African Moustached Warbler, Jacobin and Levaillant's Cuckoo. There were also a number of raptors soaring above, including an African Hawk Eagle, several Honey Buzzards and an Eleonora's Falcon. We believe the falcon is the first sighting for Southern Sudan (though they have been reported previously from satellite tracking). 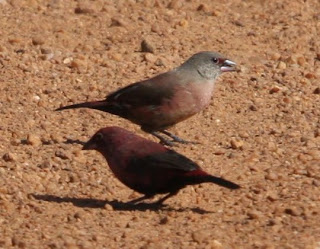 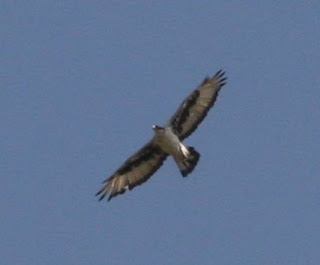 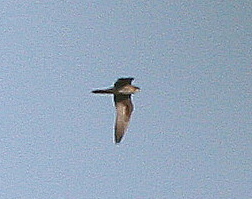 Dark phase Eleonora's Falcon (by Mark Mallalieu), Nimule Road near Juba 24 April 2011
After 48km we reached the highest point on our journey. Some large shady trees beside the road had large stones underneath and it was an obvious spot to stop for lunch. During lunch we had Bataleur eagles soaring overhead and White-winged Tits were feeding in the trees. Our lunch spot looked out across a large area of forest. We spoke to a local farmer who told us that nobody lived in the entire area because of lack of permanent water, and that he had to bring in water for his family each day from 30km away. He told us that there was little hunting pressure in the area which contained Lion and many other large mammal species. 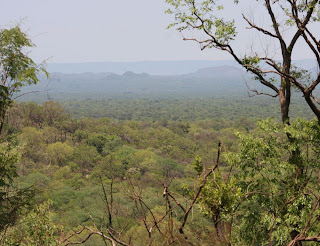 Forest 48km from Juba, Nimule Road 24 April 2011
This was clearly not the kind of place to explore at this time of day without proper provisions, but we decided to make a short trip down into the valley to have a look. The local farmer guided us down and into a forested area, with open patches farmed by him. A Greater Honeyguide called to us and seemed to be leading us to a bees nest. Our guide was familiar with honeyguides and presumably uses them to find bees nests. We had seen many people selling honey along the road, so this symbiotic relationship between honeyguides and humans (where humans are guided to nests by honeyguides, who benefit from the humans opening up the nest and getting them access to the honey) is probably commonplace. It was a very hard bird to photograph, because as soon as we approached it would fly further ahead to lead us on. Best birds of this trip had to be a spectacular pair of White-crested Turacos, though again they would not pose for the camera. 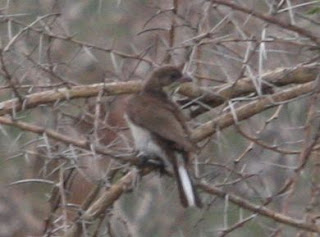 We were not particularly expecting much on the way back, but we noticed lots of Blue-cheeked and Eurasian Bee-eaters, Alpine and Common Swifts and quite a few hirundines. There were more Honey Buzzards, plus Red-necked Buzzard and Wahlberg's Eagle. We also spotted our first Fawn-breasted Waxbills. 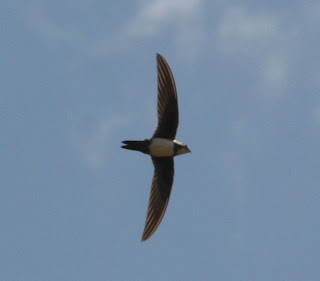 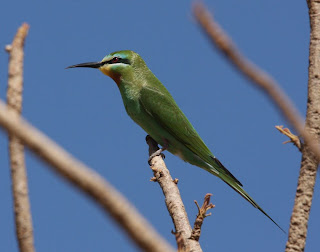 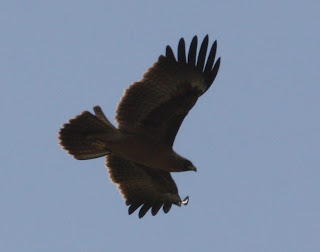 Wahlberg's Eagle, Nimule Road near Juba 24 April 2011
Another great discovery (noticed by our driver Bosco) on the return journey was that there were some big emergences of flying insects, causing big build-ups of birds in certain trees (and probably what had attracted all the bee-eaters, swifts and hirundines). There were lots of weavers in the trees including Heuglin's Masked and Little, several waxbill species, a Lesser Grey Shrike, a Black-billed Barbet and an Icterine Warbler (which might be a first record for South Sudan, as no records are shown in Nikolaus). 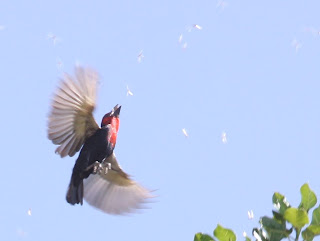 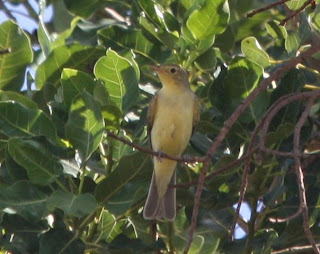 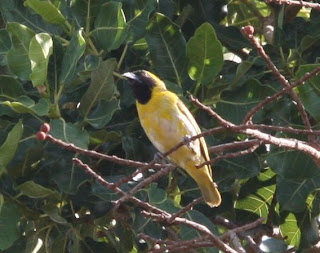 Little Weaver, Nimule Road near Juba 24 April 2011
The final drive in to Juba also produced an African Pied Wagtail and African White-backed and Hooded Vultures feeding beside the road. 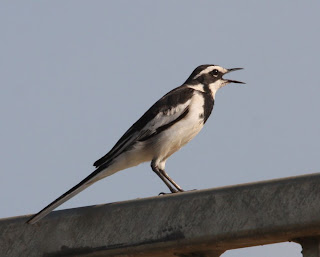 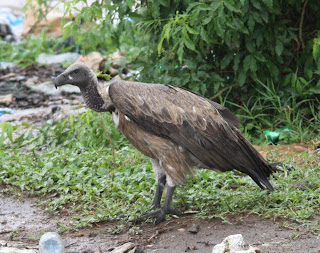 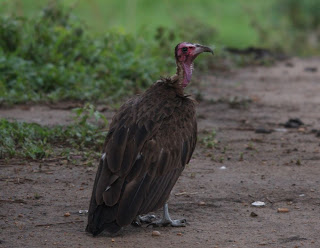 Hooded Vulture, Nimule Road near Juba 24 April 2011
We arrived back in town just before dark and had a drink overlooking the Nile at the Star Hotel. This turned out to be very productive, with a couple of Bruce's Green Pigeons and a Long-crested Eagle flying over and a few waterbirds we had not seen previously such as Senegal thick-knee, Striated Heron and Long-tailed Cormorant. One bird that had us stumped for a long time was a bulbul washing itself on the opposite bank. After lots of checking of field guides and poor photos Mark was pretty sure it was a Yellow-throated Leaflove, the version in southern Sudan actually having a white throat, but I was still dubious and would still need some convincing.

Monday was my last day and I had to fly back up to Khartoum in the afternoon, giving us only a few hours of birding. We were tempted to head back out along the Nimule Road to try the big forest area we had seen the previous day, but we realised that it would not be wise to rush it, so it would have to wait for another time. Instead we decided to try some river sites near Juba. We started with a walk along the Nile and soon came across a young Yellow-throated Leaflove being fed by a parent in almost exactly the habitat we had seen the bird the day before.  I was finally convinced by Mark's identification. In the nearby scrub we saw some Yellow-billed Shrikes, some Piapiacs, a couple of Grey Kestrels and a Red-necked Falcon. 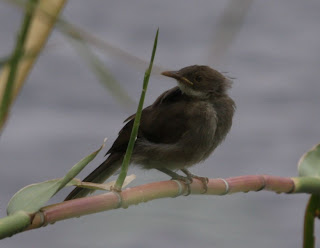 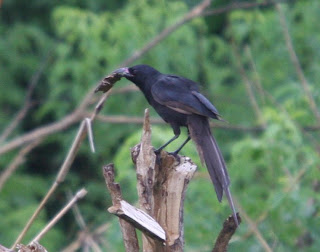 Piapiac, White Nile Juba 25 April 2011
Our next stop was on the Kit river, near where it joins the White Nile. This was a different habitat than we had visited before. Some patches of reeds along the river had several Red-faced Cisticolas, while Singing Cisticolas were in the neighbouring scrub. There were quite a few raptors here with flyover Hobby, Lanner Falcon, and a Gabar Goshawk. A pair of African Fish Eagles were a bit more obliging. Eastern Grey Plantain-eaters called from the other side of the river before giving us distant flight views. We also managed to catch up with Red-chested Cuckoo after many attempts. 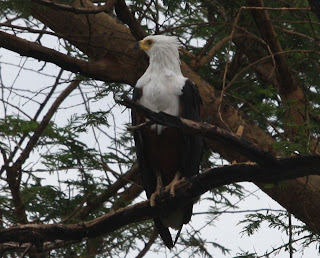 African Fish Eagle, Kit River near Juba 25 April 2011
We ended the long weekend with around 185 species, with only a limited range of habitats visited, with no less than 27 species being raptors. Mark and I both agreed that this had been some of the most exciting birding that we had ever had. Even within a few kilometers of what will be the new capital of South Sudan there is excellent birding to be had. I hope to return soon; in the meantime I leave it to Mark to try and explore some new areas. This is not always easy with some places still having land mines and some worries still about security. Priorities must be to try and find access to some of the forested hills we saw to the south on our trip along the Nimule Road, or to enter the large area of forest we encountered 48 Km for Juba. I will be looking forward to more reports from Mark.
Posted by Tom Jenner at 00:06