Tuti with Mark and Stephen

On Saturday I was back at Tuti Island, accompanied by Mark Boyd and Stephen Blight. Stephen has just arrived in Sudan from South Africa and is still getting settled while he prepares for his family to join him. Mark gave me the good news that he will also be staying with us for another year. We just had a short morning visit, but enough to get a feel for what was about. There was some noticeable movement along the river of gulls and terns, and a flock of 81 Glossy Ibis heading north was good to see. 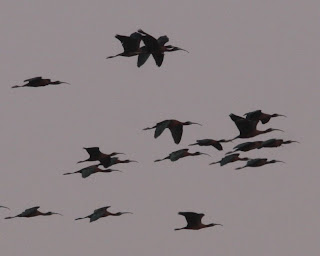 A flock of migrating Glossy Ibis, Tuti 9th April 2011
There was still quite a small passage of hirundines, including mainly Sand Martins and House Martins (my first on Tuti), but none of the Red-rumped Swallows from my previous visit. Also missing were the large numbers of Asian Palm Swifts that had been present last time. I have occasionally seen the odd Rufous Scrub-Robin on Tuti, but today there were 4 individuals and they were much more showy than usual. Other migrant passerines were present in much smaller numbers than on my last visit. 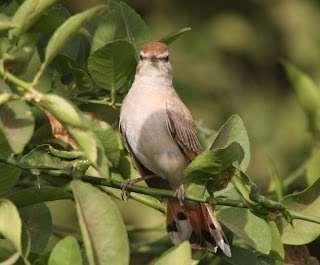