Where is the Red Sea Swallow?

In May 1984 Don Smith found a dead swallow at Sanganeb lighthouse near Port Sudan. On closer inspection it turned out to be a species that had never been seen before and was named the Red Sea Swallow Hirundo perdita (or Petrochelidon perdita).  It was a big surprise to ornithologists that a new bird species could be found here. More than a quarter of a century has passed since this discovery, but no others have yet been found and it remains one of the mysteries of ornithology. 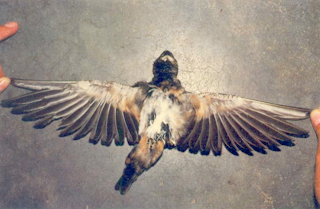 Sanganeb lighthouse is located on a small island about 30km off the coast from Port Sudan, making it harder to determine the origin of this bird. During his stay on the island Don Smith saw many hirundines passing through, including some with short tails and greyish rumps which he assumes were this species.
I have just returned from the Red Sea Hills where my brother Adam and I spent a week searching the higher plateau around Arkowit, the lowlands (mainly checking for swallows under bridges) and the dry hills north of Port Sudan. The highland plateau area around Arkowit is well known and has been studied by ornithologists, but the hills north of Port Sudan have been almost completely ignored by ornithologists in the past and this is where I had my highest hopes of making a discovery.  It was almost impossible to find any information about accessing this area and we had to go in blind. The headmaster and staff at KICS (the school where I work) were a great help in getting us the permits to drive up to Port Sudan and they provided a 4x4 vehicle and lots of top quality field equipment from their outdoor education programme. Saleh, the manager of the Basheer Palace Hotel in Port Sudan then helped us to organise the permits to visit the hills and we headed north up the coast road.
There were hills to our left all the way along, but with many km of sand dunes separating us from them. We had no idea how we would get in. Our map showed a track going in at about 40km from Port Sudan, but nothing materialised. At about 80km we saw a small side track and we headed westwards along it. We soon found that there were several tracks across this area and we just followed them blindly until we joined a larger track that headed into the hills. Once inside the hills it was a big surprise to find that there was a good network of tracks following the wadis through the area and it was relatively easy to get around with a 4x4 vehicle.
The open country and relative ease of travelling along the valleys made it relatively easy to check the ridges for hirundines. However, we did not see a single hirundine in these hills - not even Rock Martins, despite it seeming to be perfect habitat. By contrast, we had seen migrant Barn Swallows, House Martins and Sand Martins on the coastal plains and at Arkowit. I soon had the impression that this is not where the Red Sea Swallow is found, and certainly not in any numbers. My brother was a bit more optimistic, commenting that there were many other local species known from the area that we had not seen, including Rock Martin.  We finally saw some Rock Martins on the last day at Arkowit before returning home, suggesting that if we had missed this species we could also have missed another.
The hills of sudan bordering the Red Sea have been proposed as the most likely place to find the Red Sea Swallow but it could have come from anywhere, and these hills were only a possibility. I now feel that it would best be searched for elsewhere, such as in the hills near Jeddah in Saudi Arabia. However, I would still like to return and give Port Sudan a second shot.
Hopefully this enigma will soon be resolved.
Posted by Tom Jenner at 16:51