As discussed in my previous post, I have just returned from an expedition to try and find the Red Sea Swallow. Although we failed to find the swallow, my brother and I were still able to see a lot of good birds and I want to write a bit about the main areas visited as there is very little written about the birds of this region. I am actually on vacation in El Salvador as I write this, so I may need to add a few details when I am back in Sudan and have all my notebooks to hand.

Erkowit (there are various spellings) is situated in the Red Sea Hills about one hour south of Port Sudan. It seems to have been an active hill station in the first half of the twentieth century, but most of the older buildings have fallen to ruin. We stayed at the one hotel that was basic in the extreme - though must once have been fabulous. It seems that a new hotel is being built, but I was unable to get any details. Unlike further north in the Red Sea Hills (which I will discuss in another post), the area around Erkowit forms a plateau with most of the area around 2000m. Perhaps for this reason it has some affinities with the Ethiopian highlands to the south. There has been some research conducted here by ornithologists in the past, and is mentioned several times in Nikolaus' distribution atlas. 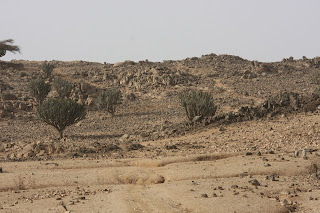 Erkowit May 2011
Although receiving more moisture than the lowlands, most of the plateau was quite dry with scatterred trees and bushes. We turned off the main highway at a tiny village called Summit and followed a decent road up onto the plateau. One immediate change was that the Brown-necked Ravens that were found lower down, were replaced by Fan-tailed Ravens. Other than the ubiquitous Crested Larks and House Sparrows, there were few small passerines on the open plateau, with Masked Shrike, Garden Warbler and Ruppell's Weaver being found. Larger species included Long-legged Buzzard, Yellow-breasted Barbet and Egyptian Vulture. 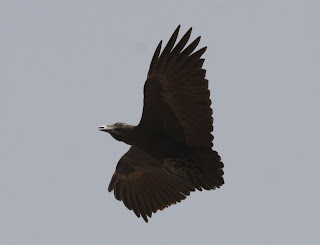 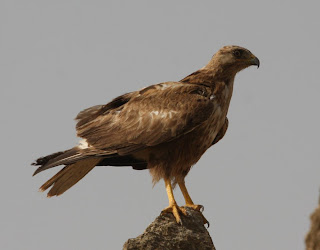 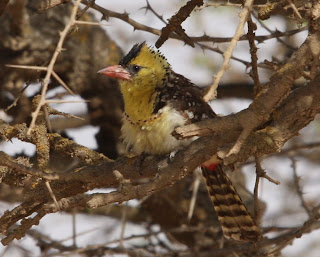 Yellow.breasted Barbet, Erkowit May 2011
Some of the steeper valleys east of the town had more vegetation and it was here that we encountered more passerines including a couple of groups of Abyssinian White-eyes. This species is mainly found in the highlands of Ethiopia and Eritrea, but just reaches into Sudan in this small area. We enjoyed this charismatic species and it was interesting to see pairs preening each other (allopreening), which is something I don't ever recall having seen in a small passerine. 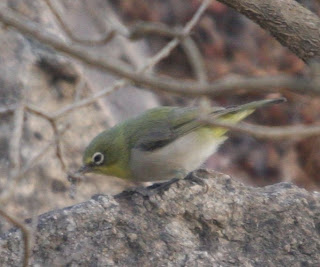 Abissinian White-Eye, Erkowit June 2011
We only spent 3 night in the area (two on the way up at the end of May and one on the way back in early June). There is clearly more to be seen here and it would be interesting to visit in winter (this region is one of the few wintering grounds of the almost extinct Bald Ibises) or during migration. As it was we were surprised to see migrants so late in the year, with Barn Swallows, Masked Shrikes and Garden Warblers present when we would have expected them to be much further north.