This is a slightly late report of a trip I made with my family to the Red Sea Resort, just north of Port Sudan, between 3rd and 5th of May. Unfortunately, I do not have internet access at home, so it is proving very difficult to keep up to date with this blog. I did not have my own transport available (we flew up from Khartoum and were picked up from the airport by the resort), so all my birding was in and around the resort itself. There were good birds present in the lagoon beside the chalets, including several Crab Plovers, which seemed to be paired up in scattered locations, suggesting local breeding. There were lots of Kentish Plovers and several small young were seen running on the mud. There were far fewer waders present than during my previous visit at the end of October, but there were still plenty of Terek Sandpipers, Ruddy Turnstones and a few Spotted Redshanks. 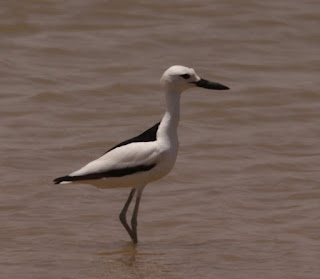 There were some Saunder's Terns around and one bird was seen passing a fish to another, again suggesting breeding.There were also a few Lesser Crested Terns, a Gull-billed Tern and a couple of Caspian Terns. I also saw a couple of Sooty Gulls. other water birds included a Striated Heron, some western Reef herons, and a couple of Greater Flamingos. 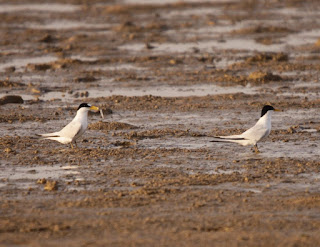 There were plenty of other birds to look at around the resort itself, including House Crows, Brown-necked ravens, big flocks of African Silverbills, Namaqua Doves, European Bee-eaters, Black-crowned Sparrow-Larks, several Ospreys, and a fly-over Marsh Harrier. 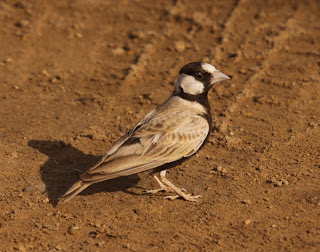 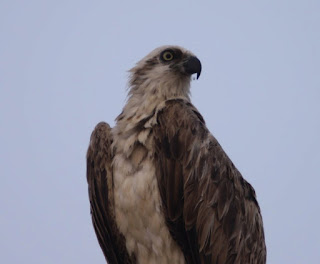 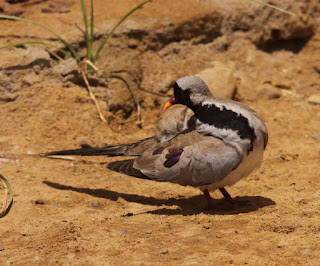 Some of the best birding was in the acacia scrub a short walk back up towards the main coastal highway. last time I saw a couple of Rosy-patched Bush-Shrikes, but this time they were very vocal and singing from the tops of the bushes, making them much easier to see. 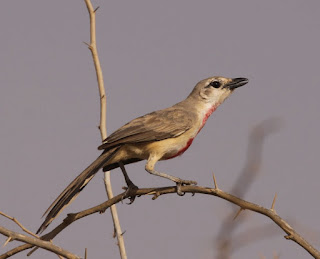 I know that Eurasian Collared Doves have been expanding their range into north Africa, but they have yet to be reported in Sudan. I kept a close look-out, as this would be the most likely place for them to arrive. All the birds I saw were clearly African Collared doves, as told by the white belly and vent. 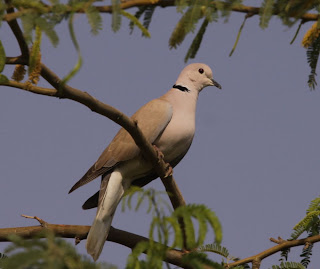 African Collared Dove, Red Sea Resort 3rd May 2013
I have seen Ruppell's Weavers breeding up in the Red Sea Hills at Arkowit, but never in the coastal lowlands, so it was nice to find this colony. The ones in Arkowit had many nests in a single tree, whereas the ones here were more widely spaced, with two or three in each clump of trees. 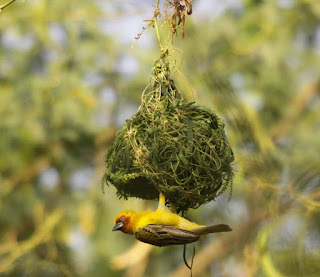 Quite a few groups of Chestnut-bellied Sandgrous were seen flying over and on two occasions I flushed a bird up from the ground in front of me. On one of these occasions I was able to find the nest and take photographs, and I assume the other one was also nesting. 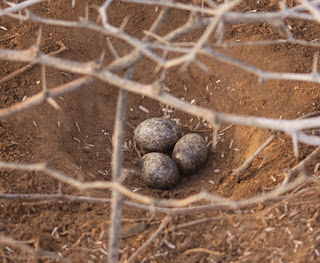 A few migrants were still moving trough, such as Sand Martins, Barn Swallows, Red-rumped Swallows, Blue-cheeked Bee-eaters. There was also a willow warbler and a Golden Oriole. It was not clear whether the Masked Shrikes and Southern Grey Shrike were local birds or migrants. A Greater Hoopoe-Lark was another nice bird in this area.
Posted by Tom Jenner at 15:54