The amazing variation of weaver eggs

I have been doing little general birding recently, hence the lack of posts. The reason is that I am trying to finish off my study of Cinnamon and Northern Masked Weavers before I leave Sudan in early June. I have been trying to get some more information about nesting, so, wearing my chest waders, I have been wading through sewage at Bahri to check nests and take measurements. As with the Cinnamon Weavers I've been studying in Sennar, I have been struck by the incredible variation of the eggs. Generally birds show little egg variation within a single species, but many weavers (possibly all, but I do not know) show huge variation, with different background coloration, different levels of spotting and different colours of the spots. A selection is shown below. 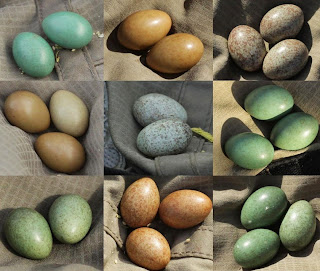 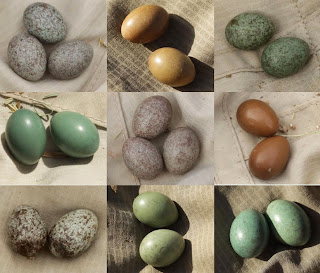 These two species have almost never been studied before, but one of the few studies was by Wendy Jackson, who investigated the reasons for this egg variation by studying Northern Masked Weavers in northern Kenya. She tested the hypothesis that this is a defence against brood parasitism, a behaviour more commonly known from groups such as cuckoos and cowbirds. The big difference here is that weavers are not looking to lay their eggs in the nest of another species, but simply to offload eggs into the nests of other weavers to increase their own chances of raising more young. It seems that the small woven nests of weavers limit the number of eggs that can be laid to 3, so any additional eggs above this number are best laid in a nest nearby. By having such variation in eggs the birds are better able to spot when an egg is from a neighbour and remove it. There are actually many species that are known to do brood parasitism in this way, such as the Common Starling, but few have evolved such variation in egg design as a way to combat it.
Posted by Tom Jenner at 00:10