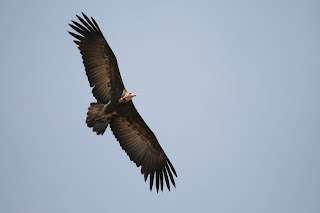 Hooded Vulture
I've just moved to Juba after five weeks in Khartoum. Bird-wise, one immediate impression is that there's a much greater variety of raptors here. Hooded Vultures Necrosyrtes monachus are numerous, with at least 50 seen daily. Next most common are Yellow-billed Kites Milvus migrans parasiticus/aegyptius, with about 10 daily. Other species seen in ones and twos include:

Today I also saw what I believe was a European Honey-buzzard Pernis apivorus, a species I was studying in UK.

The scavenging vultures are accompanied by Marabou Storks Leptoptilos crumeniferus, with up to 10 daily.

I'll say a bit about other local birds in my next post.
Posted by Mark Mallalieu at 19:04