What is the status of glossy starlings in Khartoum?

During the autumn I saw the Lesser Blue-eared Starlings reduce in number, with a single bird on October 22nd and no birds after that. This was expected, because Nikolaus describes the species as a visitor to Khartoum from late July until October (though in Cave and MacDonald, 1955, it is only listed as being found in Sennar and the Nuba Mountains!).
However, I thought the Greater Blue-eared Starling was supposed to be a resident here. They also declined in numbers and I saw my last one on October 29th (at least that is the last record in my notebooks and I may have seen them casually after this date). I saw one today beside the Blue Nile, while I was not birding. I wonder if a few hang around, but most leave. I will try and monitor them more closely and try and find a pattern. If anyone has any observations to add, they would be welcome. 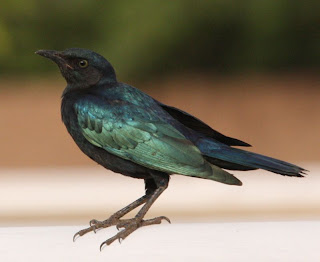