Juba in the dry season

This is a well overdue second post from Juba, after my first in September last year. Juba is now in the grip of the dry season: dusty and hot. The skies are still full of Kites, Milvus migrans ssp., but I have yet to ascertain the mix of subspecies present. I photographed the bird below earlier today. I originally considered it to be of the nominate subspecies, Milvus migrans migrans, as it has a dark bill. However, I see that in his Atlas of Sudan’s birds, Nikolaus states that aegyptius breeding along the Red Sea coast also have black bills, and Stevenson and Fanshawe's Birds of East Africa states that immature parasiticus has a black bill. The head seems very uniform in colour for migrans, so most likely this is an immature aegyptius or parasiticus Yellow-billed Kite. 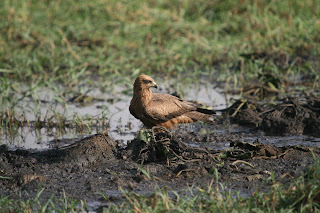 There are still several tens of Hooded Vultures Necrosyrtes monachus present, often near the abattoir. This area also hosts a population of at least 60 Piapiacs Ptilostomus afer, a curious long-tailed crow that I was delighted to find. In Kenya, where I used to live, the species is very localised along the Ugandan border. In Juba, Piapiacs are not associated with cattle (and obviously not game animals), contra the statement in Stevenson and Fanshawe’s Birds of East Africa, which is my only reference book at present. 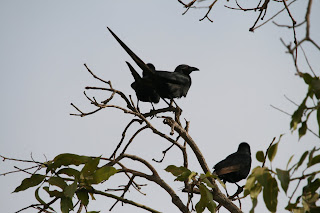 There are a few small wetland areas immediately around the town, and of course the White Nile flows along the eastern edge. Sacred Ibis Threskiornis aethiopicus have arrived, with a total of 92 seen flying to roost by the White Nile in 30 minutes earlier this week. A small marsh 3kms out of Juba held a variety of herons today, as well as two Yellow-billed Storks Mycteria ibis, which hunted in the shallow water by shading the surface with one wing extended. 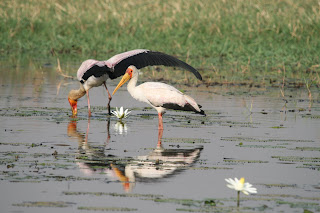 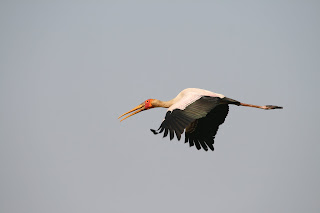 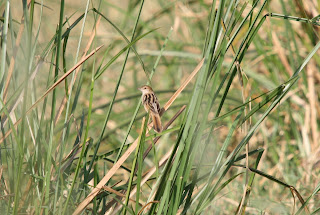 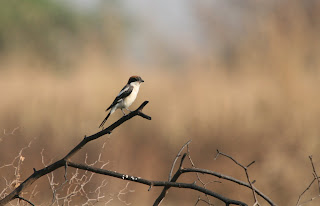 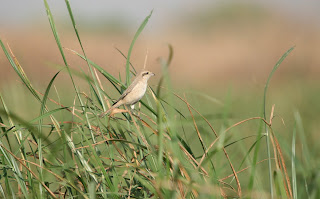 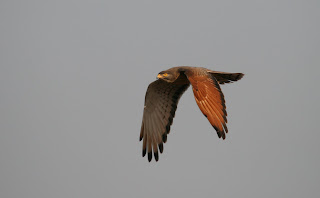 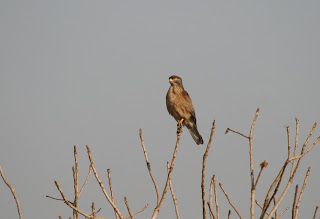