Having seen many migrants on my previous two trips to Fenti, I was interested in finding out what hangs around for the winter. There were fewer birds present and many species had clearly just been passing through, but it was evident that many species had stayed for the winter. On my last trip I had spent a lot of time studying the Yellow Wagtails. There were far fewer on Saturday, but still around 30 birds. The commonest subspecies was M. f. feldegg. Most of the thunbergi had left, but I still saw a couple; there were also a few beema and lutea still around. More evident on this visit were the White Wagtails, some of which were already moulting into breeding plumage. There are also many along the banks of the Nile at the moment. 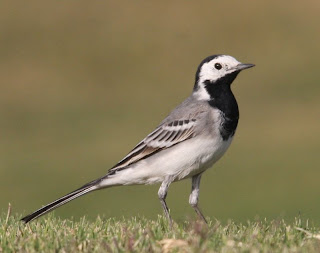 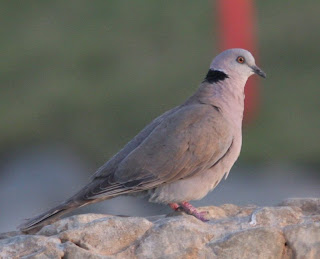 African Mourning Dove - a common resident species, Fenti 29th Jan 2011
Unusual behaviour was being shown by a Common sandpiper. I have seen them at Fenti before, where they usually hang around where you expect them, which is the edge of the pools. Sandpipers will often move short distances away from water and I have seen them on the fairways. What was unusual here was this bird was feeding in the undergrowth on the edge of the fairways, moving through the leaf litter like a typical forest species. I have not seen such behaviour from a sandpiper before. 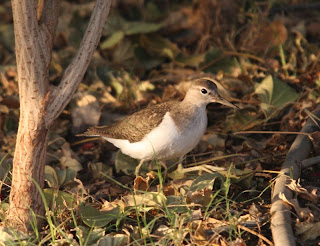 Common Sandpiper, Fenti 29th Jan 2011
Bird of the day was probably the first bird I saw when I arrived. Sitting on the top of the pavilion was a Blue Rock Thrush, which was a good bird to see. 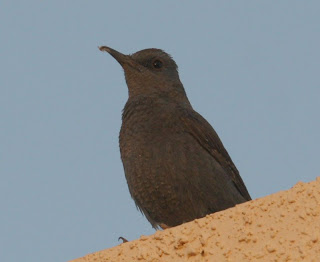 Blue Rock Thrush, Fenti 29th Jan 2011
There are many species wintering at Fenti, but the big attraction will always be the migrants. Seeing a Whiskered Tern in breeding plumage last week and then the White Wagtails this week makes me think that the start of the spring cannot be far away. I think there will be a lot of interesting birds passing through here again soon.
Posted by Tom Jenner at 20:44