I was down by the Blue Nile again at the weekend for a family picnic. I wasn't really birding, but of course I had my optics with me just in case. Best bird was a Cyprus Wheatear. My friend Juha had seen one several times a couple of km further up river back in the autumn and another the previous winter. I had tried in vain to see the autumn bird, so it was a species that was high on my hit list. Until recently they were considered to be a distinct subspecies of Pied Wheatear, but research has shown them to be a distinct species. Breeding only occurs on the island of Cyprus and the wintering grounds are still poorly known. For example, Birds of the Horn of Africa includes the species but comments that there are still no accepted records. Evidently they move through Sudan along the Nile and presumably they are wintering further south in Sudan. 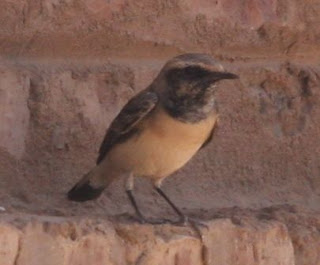 Cyprus Wheatear, Blue Nile Khartoum 18th February 2011
A Desert Wheatear was also around and seemed to be the same individual that I had watched back in December. It was hanging around in the same spot as if it had formed a winter territory. The Cyprus Wheatear had not been around then. 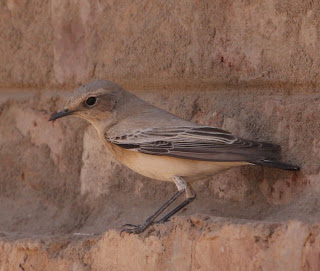 Desert Wheatear, Blue Nile Khartoum 18th February 2011
Back in the autumn I had seen Pallid Swifts on one solo visit to Tuti Island and on one visit with Juha. In a previous blog I mentioned that Nikolaus had described them as rare anywhere other than Jebel Marra. A sighting of a couple more birds today suggests that they are really quite regular around Khartoum and have probably been under recorded. I am thinking that this is probably the case with most swifts in the country. I saw a couple of Little swifts at Tuti earlier in the year with Mark Mallalieu, while Juha and I saw a group of about 50. Juha also saw a White-rumped Swift beside the Blue Nile just south of Khartoum. Neither species had been recorded within several hundred km of Khartoum before. A lot of ornithological fieldwork is conducted using mist-nets, which tend not to catch swifts. Swifts can also be hard to identify if you don't get decent photos. I can only assume that the group as a whole has been greatly under-recorded for these reasons. I will certainly be keeping my eyes open for swifts in the future. Oddly enough, I have yet to see a Common Swift. 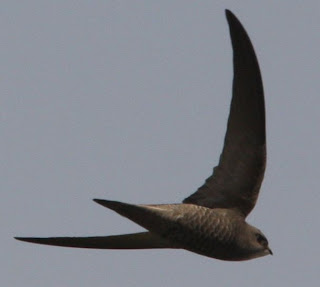