Today was my first visit to Tuti Island since the end of October, so my first chance to see what is around when there is no migration. I saw three species that I had not seen before in Sudan: a Eurasian Sparrowhawk, a couple of Red-cheeked Cordon-bleus and a couple of African Spoonbills that flew over (one in breeding plumage showing the distinctive pink legs). I have seen a few Stonechats at various locations since my last Tuti visit, but the half dozen or so that I saw today were my first on the island. The extensive orange on the underparts of the males indicated that they were all the European subspecies, rather than the Siberian form that is also know to occur here (and which is often treated as a separate species). 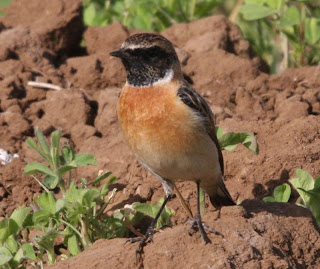 Stonechat, 5th February, Tuti Island
With fewer migrants to worry about, I had more time to look at some of the resident species and I was able to photograph a few that have not posed for me before. This is partly because I don't like to carry a camera with me through the more occupied areas, so I usually only get it out when I reach the northern end of the island where there are fewer people and where they are a bit more familiar with me by now. 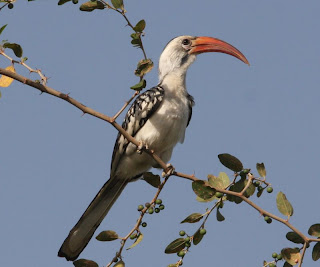 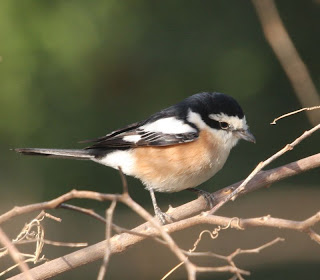 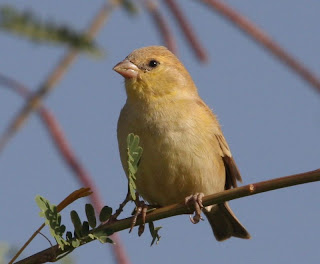 Sudan Golden Sparrow, 5th February, Tuti Island
I hadn't expected to see weavers nest building, but I suppose that in this climate they could breed at any time. Most are now in their non-breeding plumage, so presumably they adopt the breeding plumage for courtship and then lose it to allow them to get though the rest of the breeding season without attracting predators.  The fieldguides don't say anything about moult and nesting strategies, so I will have to do some research to find out a bit more about this. 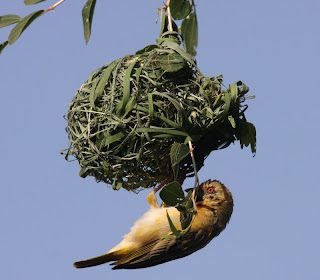