Trip up to Meroe with Mark

This weekend was the first chance for Mark Mallalieu and I to head out on a proper birding trip into the desert north of Khartoum. We were a bit short of options, so decided to head up to Meroe, stopping at Sabaloga (the sixth cataract) on the way, with minor stops at anywhere interesting on route. About half an hour or so north of Khartoum we started picking up our first good birds. A Hoopoe Lark flew over the road and landed to give us great views - a new bird for me. We saw the first of many flocks of Greater Short-toed Lark that seemed to be heading north. Shortly after, a small group of Chestnut-bellied Sandgrouse flew over the road and landed. We pulled over and were able to get good views before noticing that there were many others already present. This was a new species for us both. A little further north at Khartoum Oil Refinery a couple of Speckled Pigeons flew over the road. These were my first sightings in Sudan and are slightly further north than any records shown in Nikolaus. 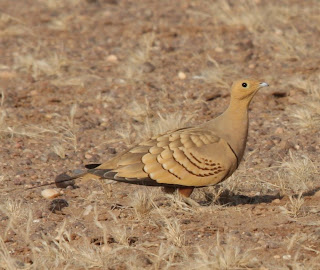 Chestnut-bellied Sandgrouse, North of Khartoum, 25th February 2011
From here we could see the big Jebel (according to the map it seems to be called Quannazir) past which the Nile flows over the sixth cataract at Sabaluka. The problem was that we had no idea how to reach Sabaluka and had only done research based on Google Earth. A brand new road with tarmac headed off towards the Jebel and we followed it up into an interesting looking valley. However, we were soon stopped at a barrier by some suspicious looking guards and sent back the other way. It seemed that we were approaching the Jebel from the wrong side, so we returned to the main road and proceded north. It was soon evident where the turn off was, because there were boys standing at the side of the road waving at people to offer their services as guides. We agreed a price of 10SDG with a lad called Wan Ali and headed towards Sabaluka, which it was now evident was approached from the northern end of the jebel. As soon as we reached the rocks at the edge of the jebel we saw a fabulous male Red-tailed Wheatear - a new bird for us both. As we continued on towards the Nile we saw some other good birds including Tawny Pipit and Desert Lark, both new for us in Sudan. 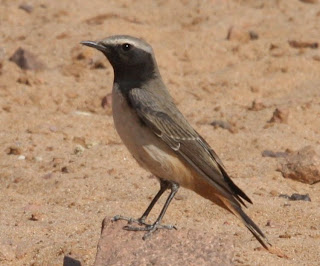 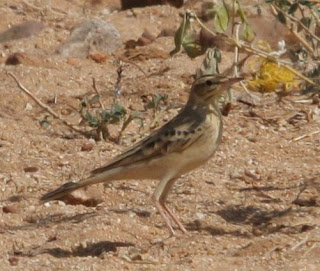 Tawny Pipit, Sabaluka, 25th February 2011
Closer to the Nile we had our first taste of some of the hassles that the guidebooks had warned us about. They are keen to get your business and will work hard to get you to part with your money. One boy aged about 10 stood in front of the car trying to urge us to pull over and use a particular parking bay. He refused to budge and for several minutes stood their with his arms stretched out trying to make us give in. Eventually he moved (after lots of beeping and revving) and we continued on to the land owned by Wan Ali's father. Again there was the haggling for boat costs, car-watching costs, extra guides (several wanted to come with us) etc. Eventually we agreed to pay 20SDG and we then left to go up into the hills. We only stayed for a short walk and looped back along the edge of the Nile. It is a gorge with only a narrow strip of vegetation and we thought it might be a good place for concentrating migrants. There were lots of Lesser Whitethroats around but not many other migrants this early in year. Residents included Blackstarts and Striolated Buntings and Crag Martins, plus species you would expect in Khartoum such as Nile Valley Sunbirds, Siberian Stonechat, Rufous Scrub Robin, and Sudan Golden Sparrows.  We were interupted by a couple of large groups of Common Cranes circling overhead. We found a patch of flight feathers on the rocks that appeared to be a raptor kill. It was hard to pin them down to a species, but we think they may well have been from an Egyptian Nightjar. Mark kept a few and may be able to identify them later. 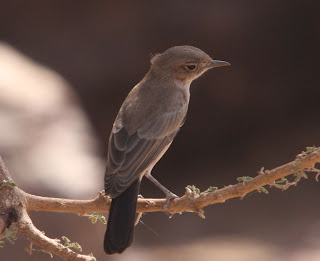 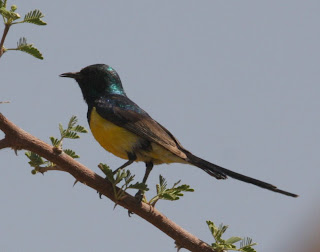 Nile Valley Sunbird, Sabaluka, 25th February 2011
We didn't stay long and headed north towards Meroe, where we were staying at the Italian Camp. Its not cheap, costing the equivalent of about $240 for two in a tent with dinner and breakfast, but it was a very nice place to stay, the food was good and we both felt it was worth the money. On the road up to Meroe we found a family group of Brown-necked Ravens that were still hanging around a nest in a large metal electric pylon. One thing that struck us was the pale yellowish colour of the legs of these birds. This is not shown in the books. 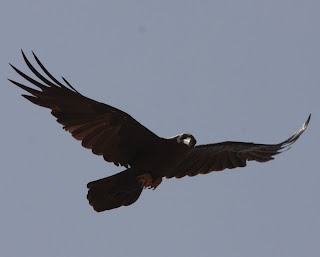 Brown-necked Raven, South of Meroe, 25th February 2011
On arrival we were presented with great views of a Desert Lark feeding its young around the wheels of our car. We also saw that there were Trumpeter Finches flying around the camp. 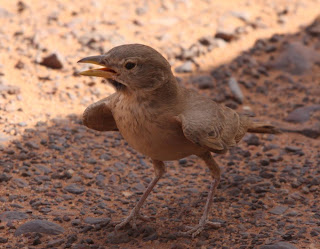 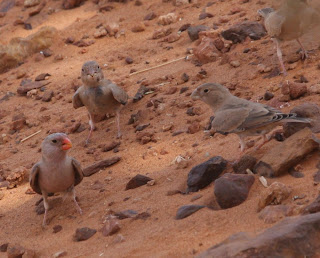 Trumpeter Finches, Meroe, 25th February 2011
That evening we went out for a couple of hours birding and soon caught up with some Sylvia warblers. As expected, there were a few Lesser Whitethroats but we also found an Eastern Orphean Warbler and a Menetries Warbler (our first ever). We spent a lot of time tracking each one as they flew from bush to bush and disappeared into the foliage. Eventually, by building up notes from brief views and by taking poor quality photos, we were able to identify them both. More obliging was a nice male Ruppell's Warbler. Another good bird here was a fly-over Egyptian Vulture. At night we tried driving around to look for the eye-shine of nightjars, but without success. 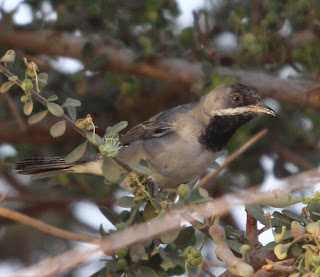 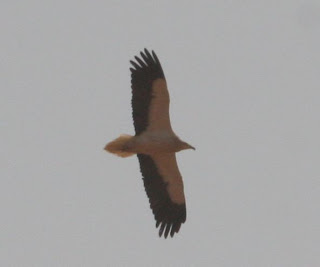 Egyptian Vulture, Meroe, 25th February 2011
The following morning we headed over to the south side of the pyramids (the Italian Camp is on the north side). Our main goal was the Desert Sparrows that I had seen on my previous visit. On the drive over we saw a fox returning from its night prowl. Once at the site we quickly found the sparrows right beside the bush where I had seen them nest-building in November. We also found a couple of Desert Warblers - a species not previously reported from this part of Sudan - and a few other species (including a couple of Hoopoe Larks). We then came across a group of 3 unfamiliar larks. Neither of us is very up on lark identification and we didn't have field guides with us, but by elimination we decided they must be Dunn's Larks. We stalked them for a while taking detailed descriptions plus many photos that we thought had confirmed our first thoughts and when I first posted this trip report I discussed how happy we were to have found some Dunn's Larks. On a later trip I photographed a group of similar birds with male Black-crowned Sparrow-Larks. This raised my suspicions and I decided to check with Birdforum, where  our error soon became apparent (Birdforum link). 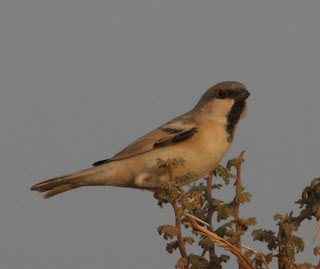 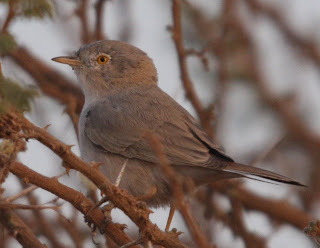 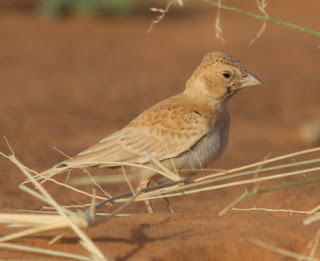 Black-crowned Sparrow-Lark, Meroe, 25th February 2011
We felt that we had seen all we deserved, but we still made a couple more unscheduled stops on the way back whenever we saw a slightly different habitat. One area with slightly denser bushes produced a couple of Cricket Warblers (Marks first and one of our target birds for the trip). Another area was very flat and open with a pale wash of thinly distributed green grass. We pulled up at a random spot, but quickly saw several larks including a male Black-crowned Finch Lark and our best views of Hoopoe Lark and Greater Short-toed Lark. 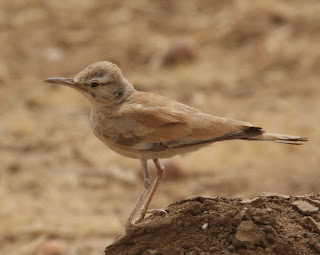 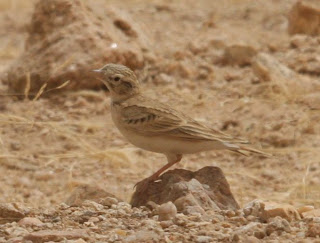 Greater Short-toed Lark, 115km south of Meroe, 25th February 2011
We were very pleased with what we saw and it confirmed our thoughts that there are lots of good birds out in the desert if you can get the chance to explore a bit. Six species of lark and five species of Sylvia warbler were particularly noteworthy. I look forward to our next trip.
Posted by Tom Jenner at 21:03