As discussed in my previous posts, the main aim of our trip to Port Sudan was to look for the Red Sea Swallow, which meant that little effort was made to look for coastal birds. However, I will still summarise a few of the sightings made. We had some delay in Port Sudan waiting for our permit, which gave us a bit of time to wander around and to visit the old port of Suakin. One of the most noticable birds in built-up areas along the coast was the House Crow, which is apparently an introduction or escape. The other two crow species in the region were clearly divided from them by altitude, with Brown-necked Ravens in the middle elevations of the Red Sea Hills (including the areas below Erkowit where you turn off the main road) and Fan-tailed Ravens on the higher plateau at Erkowit. 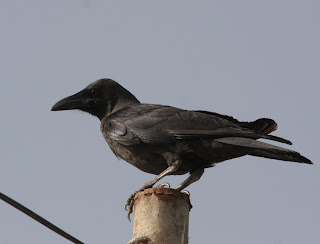 House Crow, Suakin 29th May 2011
Raptors of the coastal plain included Egyptian Vultures (which were also common up at Erkowit). A pair of Lanner Falcons gave good views as they fed their two fledgelings. An Osprey flew over at Suakin, presumably on migration. We had hoped to see Sooty Falcons as they are supposed to be quite common breeders in the region, but they seem to be confined mainly to the islands off the coast. 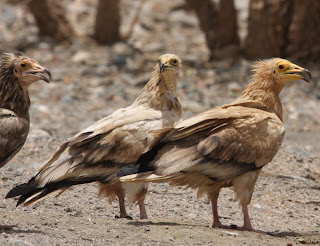 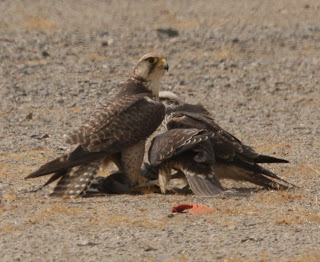 Female Lanner Falcon with young, Red Sea coastal Plain 1st June 2011
At Suakin we had a chance to see a few sea birds. Sooty Gulls were common, but we did not see any White-eyed Gulls on our brief visit, though they should be around the area. There were also few opportunities to look for terns, with several species supposedly found (such as Saunders Tern and the two crested terns). One species we did pick up at a bit of a distance was White-cheeked Tern. I would be interested in making a trip up here to investigate the coast a bit more and visit some of the islands. 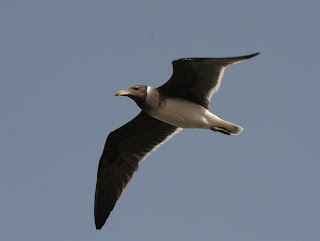 Sooty Gull, Suakin 29th May 2011
There were a few other species seen on the coastal plain such as Hoopoe Lark (also present at Erkowit), Black-crowned Sparrow-Lark, Sand Martin, African Silverbill, Chestnut-bellied Sandgrouse (unidentified Sandgrouse were also in the Red Sea Hills), Little and Cattle Egrets.