Tuti Island and the Sunt Forest with Terry

Terry and I visited Tuti Island yesterday, followed by a brief visit to the Sunt Forest. A group of three Black-headed Lapwings was a nice find and the first that Terry has seen here. 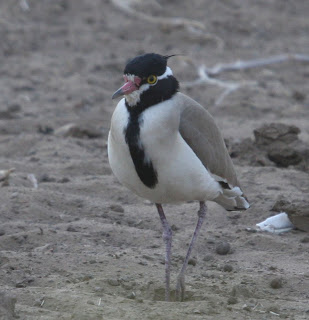 Black-headed Lapwing, Tuti 16th December 2011
As we arrived on Tuti we saw an unidentified Accipiter that seemed to be mobbing a Common Kestrel; surprisingly, this was the first I've seen on the island. We saw a few other Accipiters elsewhere on the island, including a couple chasing each other. One, at least, was an adult Eurasian Sparrowhawk. A Lanner Falcon was also hunting near the northern end of the island. There was a small tree near the northern end of the island containing a flock of about 10 Yellow Wagtails, plus there were a few others feeding in the field nearby. Neither of us recall seeing a flock of Yellow Wagtails in a tree like this, and we wondered if perhaps the number of small raptors around today might have been making them wary. A few Sudan Golden Sparrows were in the tree with them 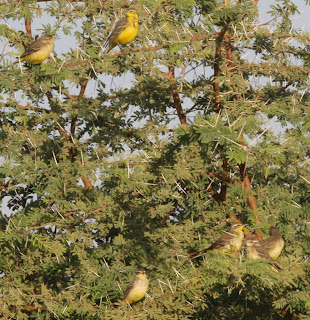 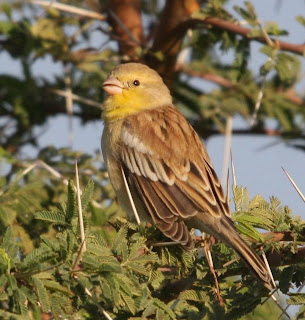 Sudan Golden Sparrow, Tuti 16th December 2011
There was little of note at the Sunt Forest that had not been present last visit, though we only stopped briefly and spent little time in the actual forest. The pools that had been good for waterbirds on the last few visits have now nearly dried up, so waterbirds are mainly located on the banks of the White Nile.There were no flamingoes present this time. At least one of the Whiskered Terns was already in summer plumage.
Posted by Tom Jenner at 10:17