An evening visit to Tuti with Yousif and Patti

Today I made a brief evening visit to Tuti with Yousif (a birder visiting from Canada) and his fiancé Patti. The main aim of the trip was to show them where to go on Tuti Island and how to find the Sunt Forest, as I will be out of the country for most of their time here. Time was short as we didn't get to Tuti until nearly 5pm, but we still managed to see a few good birds. Last visit I had seen some Black-headed lapwings and we twice saw some today, though it wasn't clear if they were two different groups. There were lots of Chiffchaffs around and some large groups of weavers that were difficult to identify as none were in breeding plumage. We managed to find a few new species for Yousif, such as a group of Crimson-rumped Waxbills, plus a Gabar Goshawk showed well just as the light was fading. 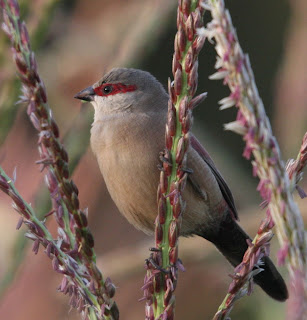 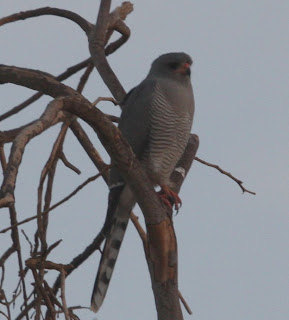 Gabar Goshawk, Tuti Island 20th December 2011
By the time we reached the Sunt Forest it was too late to see any birds, but hopefully Yousif and Patti will be able to return and see plenty at a later date.
Posted by Tom Jenner at 23:28