A couple of trip reports by Yousif

I was out of the country for about a month while Yousif Attia and his fiancé Patti were in Sudan, so unfortunately I was unable to join them on any more trips. However, Yousif has sent me a report of a trip they made to Tuti Island and another to Sabaloka, plus a number of photos. I am grateful to him for letting me post them below. I was particularly interested to hear about the Cinnamon Weavers, which extends their known range slightly north of that shown by Nikolaus. I hope to get up there soon to see if they are still around. Yousif also mentioned seeing a Cream-coloured Courser on a brief visit to near the Sunt Forest. This is a species I have still never seen despite lots of searching in several countries.

December 22, 2011
Patty and I took a morning walk to explore Tuti Island a little more.
We saw much of the same as the previous trip but there were a few more birds around.  Cut-throats were the most abundant species today with small groups all over the island and I estimated no less than 250.  Flocks of Pin-tailed Whydahs had a couple males in breeding and transitional plumage.  A Masked Shrike was at the extreme northern end of the island as well as a large group of Little Bee-eaters and a single Wryneck.  Raptors were on the move and I noted a European Honey-Buzzard among the numerous kites. A pair of Egyptian Geese flew by and there was a large feeding flock of White-winged Terns and 2 Caspians. The Black-headed Lapwings continued to show well and a nice male Common Redstart was nice to see.  We were excited to see a couple Red-cheeked Cordon-bleus and a pair of Rose-ringed Parakeets flew overhead.  Black-billed Wood-pigeons showed well which were missed on our initial visit here. 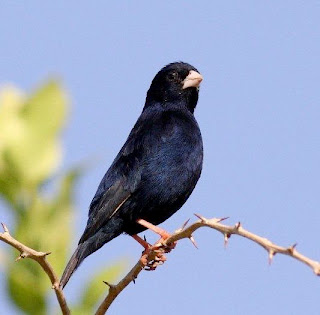 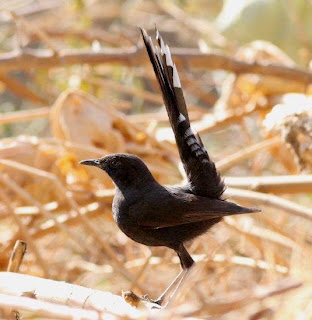 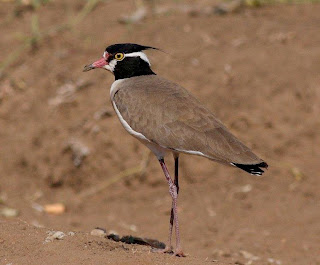 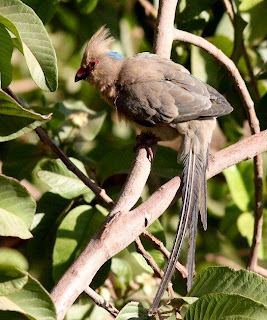 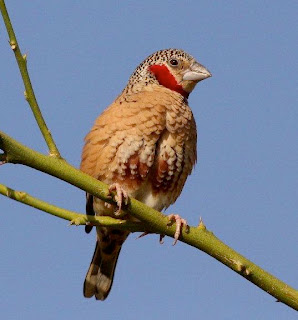 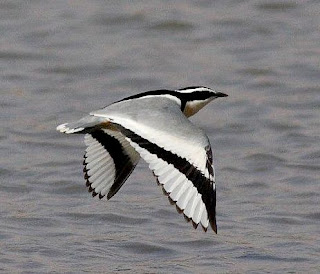 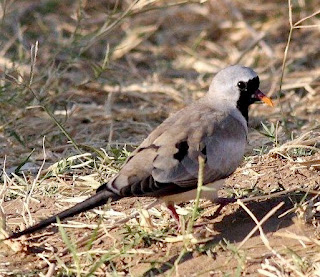 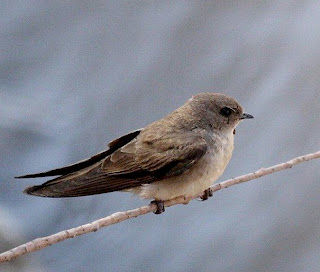 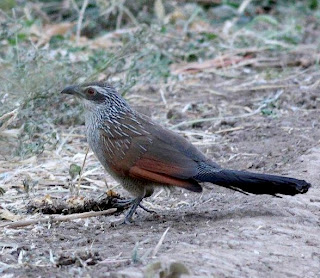 White-browed Coucal
December 23, 2011
A group of relatives and friends took Patty and I on a trip to the 6th Cataract or Sabaloka "waterfalls".  Bird diversity was not particularly high but the bushes were active with palearctic migrants, primarily Lesser Whitethroats.  Three Abdim's Storks circled over the hills.  A number of House Buntings (Striolated), Blackstarts and a Blue Rock-Thrush were of note as well as a single Rufous-tailed Shrike (IsabelineShrike). It is interesting to note that many of the local weaver males were in full alternate plumage, in contrast to the birds at Tuti the past few days, which have virtually all been in confusing basic plumage.   We hired a boat which took us up the rapids and on a sand flat area of the island across Sabaloka.  There were a number of shorebirds including Black-winged Stilt, Common Greenshank, Common Sandpiper, Curlew Sandpiper Little Stint, Common Ringed Plover, Kentish Plover and Egyptian Plover.  Our guide then drove the boat directly across the sand flat to a narrow lush strip of trees along the bank of the Nile after hearing we were seeking birds.  Both Little and Green bee-eaters were found as well as a Striated Heron and a pair of Pied Kingfishers. The true prize for the day however was while drifting by a confirmed but brief look at a male Cinnamon Weaver singing in what looked like a loose colony.  I really did not expect to see this as I had ruled them out after seeing how all the weavers were in basic plumage.  Also present was a male Little Weaver making it a 4 weaver species day.  I later saw a female weaver which had much browner tone and I assume it may have been a Cinnamon Weaver as well.  All in all it was a productive day and we had a delightful picnic by the water to round it off.
Yousif Attia - January 2012
Posted by Tom Jenner at 00:05