A brief visit to the Sunt Forest

Last Friday (February 3rd) I made a brief visit to the Sunt Forest. I was most interested in visiting the forest to look for land birds. There were big numbers of Lesser Whitethroats and lots of Eastern Olivaceous Warblers, but not much else of interest in the forest. Much of the pools had dried up, but there was still a similar selection of shorebirds to previous visits, though in smaller numbers. The best bird of the day was an immature Great Spotted Cuckoo in the more open area at the edge of the forest. This was my first sighting of this species in Sudan. 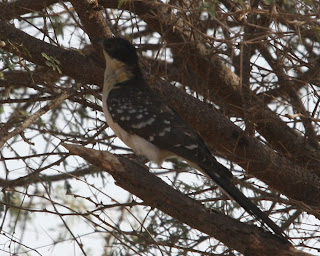 Great Spotted Cuckoo, Sunt Forest 3rd February 2012
I also spent a bit of time trying to photograph a wheatear that I thought might be a Cyprus Wheatear, but could also have been a Pied wheatear. The first thing to determine was whether it was a male or female. If female it would definitely not be a Pied Wheatear, which has a much plainer female plumage. The dark crown suggested a female, but I was unsure whether a first-year male Pied might still have such a plumage. I put the photos onto Birdforum (Click here) and soon had a reply from Brian Small (one of the top birders in Africa and Illustrator of Birds of the Horn of Africa, the main bird book to use in Sudan) which indicated why it was not a Cyprus Wheatear, but in fact a first-year Pied Wheatear. Apparently the crown was not dark enough and the underparts not burnt enough to be a Cyprus. He also discussed how the 3rd primary could be seen to be the longest in one photo, whereas in Cyprus the longest primary should be number 4. Its nice to have such expertise available to help out with identification. Birdforum really is a great place to go for such things. 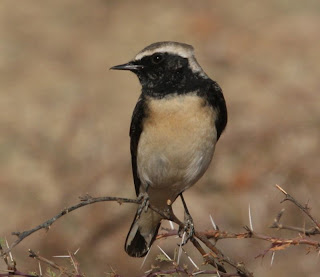 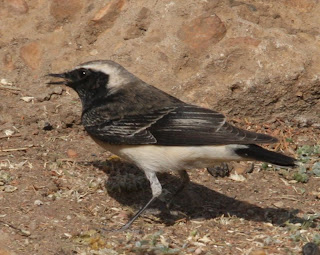 Pied Wheatear, Sunt Forest 3rd February 2012
The wintering range of the Cyprus Warbler is still little known, but it seems that Sudan may be the main area. I hope to keep tabs on records of this species, but it evident that I still need to get my head around the identification. Another interesting sighting was a Speckled Pigeon that flew overhead - my second sighting at this location.
Posted by Tom Jenner at 21:43