A brief trip to the KICS stables on the Blue Nile

My son now takes riding lessons every Sunday, and this week I was able to pop off for half an hour to check the birds. There was little on the river except for a few stilts and other distant waders, so I checked the fields and bushes. As discussed in my previous post, on Friday the Village Weavers were building nests and displaying in a small colony on Tuti Island. I also observed this at the stables, but with a much larger colony of around 50 nests in higher trees (the only ones in the area). Until recently I had only seen one Little Green Bee-eater at the stables, but there have been a few hanging around recently. 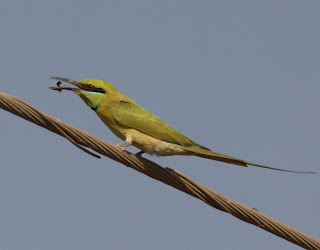 Little Green Bee-eater, KICS stables 12th February 2012
A couple of White-rumped Seedeaters were my first sightings at the stables, as was a Tawny Pipit, which was the best bird of the day. This was probably an early migrant. 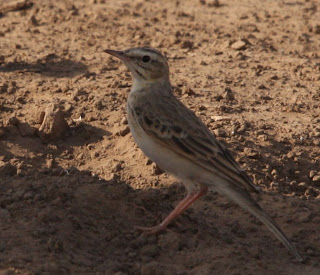