In recent years there has been a lot of research on the different varieties of large gull in the northern hemisphere. What was once known as the Herring Gull has now been split into a number of different species, with many birders still questioning the taxonomy of some of the new ones. Many are very similar in structure and markings, but identification is made more difficult by the fact that they have different plumages each year for the first 5 years of their lives, and are different in summer and winter. The main reference for the birds of Sudan is Nikolaus' Distribution Atlas of the Birds of Sudan, from 1987.  He describes the 'Herring' Gull as rare and a vagrant inland, with mapped locations at or near Khartoum and Port Sudan. The subspecies reported is heuglini, now known as Heuglin's Gull. He also comments that taimyrensis (also usually considered a form of Heuglin's Gull) could occur as well. When he wrote this the split of the 'Herring Gull' group had not yet been widely recognised and very little was known about the identification and distribution of the different forms.

On November 16th 2010 I photographed a 'herring-type' Gull at Jebel Aulia reservoir. I posted the photo on my blog for that trip (birdingsudan.blogspot.com) and also started a bird forum discussion (birdforum.net). Unfortunately the photo was not clear enough to confirm an identification, though Caspian Gull was presented as a likely possibility. On subsequent trips I have been looking for large gulls, but without success.

On Friday there were at least two 'Herring-type' gulls that flew past with Lesser Black-backed Gulls. One was too far out to photograph, but the other came in quite close allowing some decent photos. 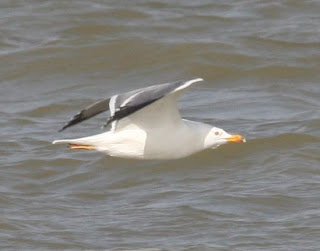 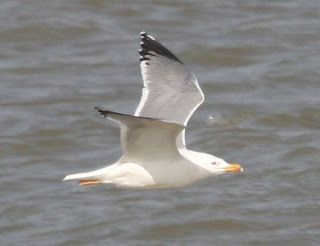 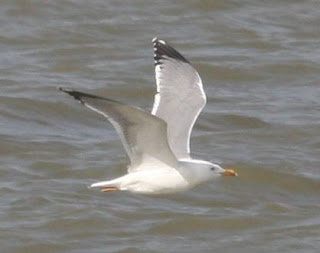 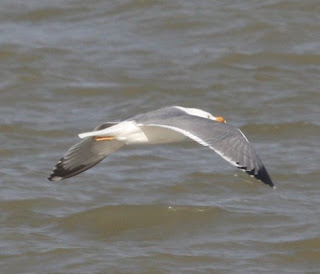 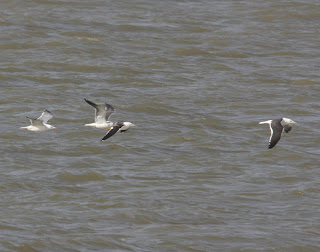 Probable Yellow-legged Gull with Lesser Black-backed Gulls,
Jebel Aulia 17th February 2012
I have not kept track of the difficult identification of these new large gull species, so I went straight to the experts on bird forum for advice (birdforum.net). It seems that this individual was a Yellow-legged Gull Larus michahellis, though confirmation is still required. This would be the first record of this species for Sudan. However, given that I have seen 3 individuals in two different years, I doubt that this is a vagrant and I would like to find out more. I would like to know whether these birds are just passing through or whether they stop off at the reservoir. I would also like to know if they all Yellow-legged Gulls, or if other species are present.
I would welcome any help or advice on this; if anyone knows of any gull roosts, or has any other records or photographs I would like to hear about them. I would also like to know if any of the records referred to by Nikolaus are from specimens and, if so, where they are located.
Posted by Tom Jenner at 20:15