Between the 5th and 9th of January the two of us (Chris and Esmat) made a waterbird ringing expedition to um Shugeira Island in the Blue Nile in Khartoum. We were accompanied by 3 researchers who were taking samples as part of an avian disease survey. The Nile is used as a flyway and stopover for many migrating Eurasian migrating birds and um Shugeira is an attractive stopover for many of them.
Um Shugeira is completely submerged during the flood season and only emerges from the waters as they drop in December. Many thousands of migrant and resident waterbirds use the island as a roost and feeding area during this time. The eastern edge of the island drops off into several metres of water but the western edge shelves very gradually creating large areas of shallow water and soft mud flats, ideal for the feeding waders. This soft mud makes net inspection, especially at 2 am, somewhat difficult and without full length waders the only successful method is to go barefoot, all other footwear is sucked off your feet by knee-deep mud. Esmat had waders, Chris did not. 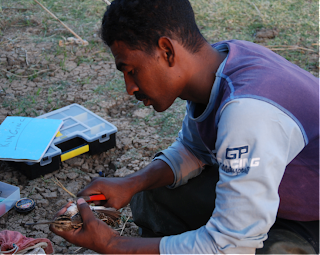 Esmat ringing a common snipe
We kept the nets open 24 hours a day for the whole time and managed a reasonable number of ringed waterbirds. As usual in this situation, there were a number of frustrating species. Every evening we had 1200 Common Ringed Plover on the dried mud near where we were camped. In spite of our efforts we caught none there and only managed to ring a handful during the whole time. Ruff, as usual, were difficult to catch. There were several medium sized flocks, but they managed to avoid the nets and again we only caught a handful. The big disappointment was our failure with the Black-tailed Godwit; there were numbers feeding and flying past our nets for much of the time, but we only managed to ring three birds of this species. This was probably due to the bright full moon that made the nets visible to birds. The most numerous species ringed were Little Stint, Curlew Sandpiper and Whiskered Tern. In total 242 birds were ringed.
We had one recovery, a Little Stint that had been ringed in 2010 on um Shugeira. This was one of only about 50 birds ringed that year. This site fidelity was interesting in itself, and with the 242 birds ringed this year we are hopeful of some more recoveries next year. Of course the prize would be to have a bird recovered in the north.
Additional birds of interest were a solitary Osprey, flocks of 50 Spoonbills and a flock of 100 Greater Flamingo. In the deeper water beyond our nets were many ducks, predominantly Northern Shoveler, Northern Pintail and Eurasian Wigeon. The total number of waterbirds recorded  during the survey was 4576 from 33 species dominated by waders.
In general the ringing was a success and with the experience gained from this we hope to improve our “catch” in future.
Species ringed
1.     Little Stint
2.     Temminck’s Stint
3.     Curlew Sandpiper
4.     Whiskered Tern
5.     Greater Painted Snipe
6.     Common Snipe
7.     Jack Snipe
8.     Ringed Plover
9.     Ruff
10.  Marsh Sandpiper
11.  Wood Sandpiper
12.  Yellow Wagtail
13.  Black-tailed Godwit
14.  Common Sandpiper
15.  Gull-billed Tern
16.  White-winged Tern
By Chris Wood and Esmat Faki
Posted by Tom Jenner at 21:45