A Waterbird Count in Juba - By Chris Wood

Waterbird Count Juba, January 2012
I was recently in Juba and took the opportunity to carry out a waterbird count for the South African Waterbird Census (AfWC) with Richard Trewby. Richard hired a boat at the Oasis hotel for Sunday 29th January. The count was made on the 29th January 2012 from 0745 am to 1200 midday.
We began at the Oasis Hotel harbour (4o50.076’N: 31o36.959’E) at 0745 and returned at around midday. We travelled North along the Eastern bank of the Nile for approximately 2.5 kms and returned along the Western bank. On the return trip a stop was made a medium size island at N4o50.616: E31o37.558’
Good numbers of birds were recorded but surprisingly few waders, the most common being the Common Sandpiper and Senegal Thick-knee. One Osprey was seen and two Rock Pratincole were also recorded. Overhead there were usual numbers of Marabou Storks, Black Kites and Hooded Vultures. 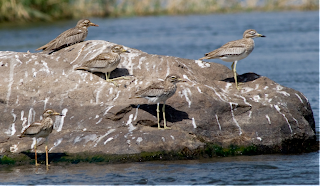 Senegal Thick-knee – Juba, January 2012
We were on a boat and so did not see many non waterbirds but travelling up close to the western bank we came across two breeding colonies of Red-throated Bee-eaters, which was a new bird for me, and lovely to see. The nests were in a vertical bank about 2.5 metres high and at the first site there were probably about 20 nesting holes and we saw around 10 – 12 pairs. At the second site there were fewer nest holes and birds, but the bank was similar in height and structure. The rocking of the boat made it difficult to get a decent photo. 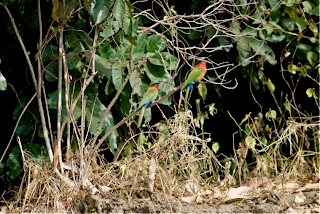