A month ago I photographed a group of Slender-billed Gulls moving north up the White Nile, which turned out to be only the second inland record for Sudan. Today I photographed a single bird moving north up the Blue Nile past the KICS stables. It seems that this might be an under recorded species in the region. The Blue and White Niles lead to very different locations, so I wonder where these birds are coming from. To my knowledge there are no records of this species from South Sudan. 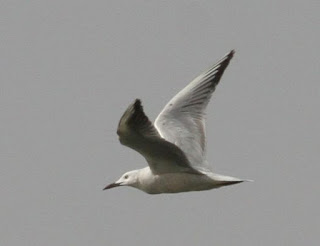 Slender-billed Gull, KICS stables on the Blue Nile
Khartoum 25th March 2012
There was not much else to see during my brief trip. The only migrant waders were a couple of Little Stints and there were only a couple of White-winged Black Terns that were heading north. There were few land migrants with only a Black-eared Wheatear, about 10 Hoopoes, and several Red-rumped Swallows to note. The last time I visited this site was two weeks ago, when I was surprised to see three separate groups of Wattled Starlings, though there were no sign of any this time. Nikolaus describes them as rare other than in the south east (presumably meaning what is now South Sudan). However, I have recorded them at the stables before.
Posted by Tom Jenner at 21:25