It is good to hear that Juha is back in Khartoum for another visit. As before, he is staying beside the Blue Nile just south of the city, where he is well placed to see migrants moving along the river.  Yesterday evening he saw large numbers of Great White Pelicans moving north up the river. He ran off to get his camera and after his return estimated about 600 passed by. 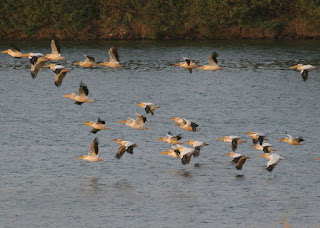 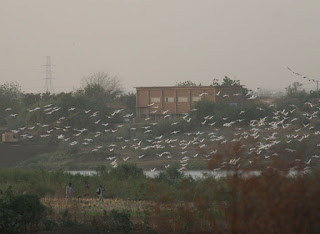 Great White Pelicans, Blue Nile south of Khartoum 29th March 2012
This morning he walked north along the Nile a couple of KM and saw lots of large footprints, suggesting they had stopped there overnight. He also saw Black-tailed Godwit, Collared Pratincole and Yellow-breasted Barbet. 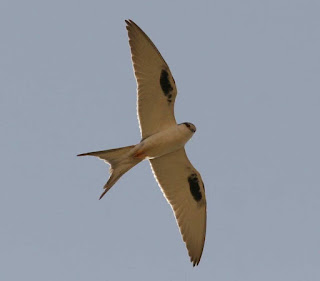 African Swallow-tailed Kite, Blue Nile south of Khartoum 29th March 2012
The bird above is one of 12 African Swallow-tailed Kites he saw a few weeks ago near his home, which he felt might be migrating north. This is the most northerly population of this species (actually it is slightly further north of any published records), so one has to wonder where these birds might have been going. On previous visits he has had Cyprus Wheatear hanging around near his residence (which is quite close to the KICS riding stables, where I reported one myself last year), though there have not been any this year. I look forward to hearing more reports from him.
Posted by Tom Jenner at 00:15