My latest visit to the KICS riding stables

I made a brief trip to the KICS riding stables again today. The last couple of weeks there have been quite quiet, with most of the waders and terns having left. There have been a few migrants, including quite a few Hoopoes, but not much of note. There was a similar spread today, but a few additional birds of note. An Isabelline shrike was the first I have seen at the sight and must be a bird on migration. 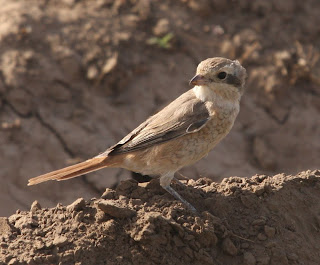 Isabelline Shrike,
KICS riding stables on the Blue Nile 4th March 2012
Another new bird for the site, and only my second in the country, was a Black-shouldered Kite which flew over quickly offering no chance for a photo. I have seen its close relative, the African Swallow-tailed Kite, here on several occasions but have never had the chance to photograph one. Today there were two birds patrolling the area and this time one gave me just enough time for a photo as it flew past. The Distribution Atlas of Sudan's Birds by Nikolaus does not show then coming this far north. 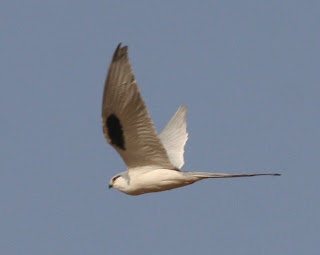 African Swallow-tailed Kite,
KICS riding stables on the Blue Nile 4th March 2012
Another new species for the site was White-faced Whistling Duck. A group of 35 were sitting on a small island on the far bank of the Blue Nile.
Posted by Tom Jenner at 22:40