I was at Tuti again this morning and there were some good birds around, even though there were few migrants. The best sighting was definitely a Red-necked Falcon; last year one had flown right past me in almost exactly the same place, but had been too quick for me to raise my binoculars and identify it with certainty. Today's bird also flew past and quickly out of view, but I went straight after it and tracked it down to where it was sitting in an open tree beside the White Nile. Luckily it let me get quite close for some photos. 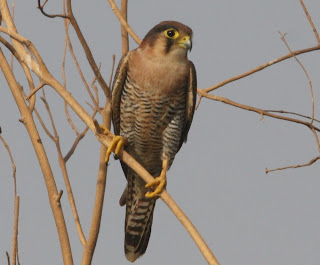 Red-necked Falcon, Tuti Island 14th October 2011
Another species that I have not seen previously in Sudan is the Barred Warbler. Today I saw my first, skulking, as they often do, in the low bushes beside the White Nile. Eventually it came out and showed well enough to get some photos. Other migrants were scarce, with a similar selection to previous visits, but in much lower numbers. 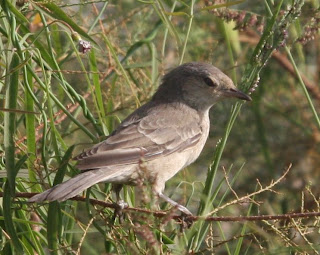 Barred Warbler, Tuti Island 14th October 2011
Since arriving in Sudan I have been struggling to identify the migrant Black Kites from amongst the many migrating Yellow-billed Kites that move down the Nile from Egypt. An adult Yellow-billed Kite is easy, because of its all yellow bill, but juveniles have dark bills like Black Kites. Today I had the chance to photograph two birds in quick succession that seem to show the features to separate them apart. The first bird is what I believe to be a Juvenile Black Kite and the second is an adult Yellow-billed Kite. The Black Kite has slightly broader wings, a much shallower tail fork (though the tail is admittedly very worn), it has 6 distinct primaries (while the Yellow-billed has 5, plus a blunter 6th primary), plus the overall colouration of the Black Kite is duller than the Yellow-billed. I would welcome comments, as I am still not confident that my eye is properly tuned in to separating the two. 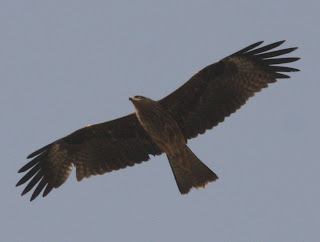 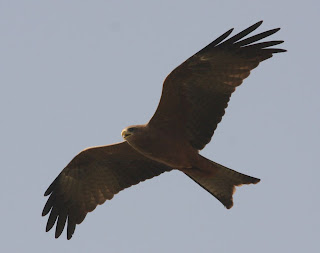 Yellow-billed Kite, Tuti Island 14th October 2011
Here are a few other shots from today's trip. White-headed Babblers are everywhere on Tuti, yet they are an almost completely unknown species and there are very few photos available on the internet. This male  Village Weaver was moulting out of its breeding plumage, but was still an attractive bird and very vocal. There were quite a few Red-billed Hornbills feeding in the fields today. 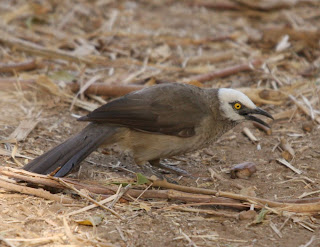 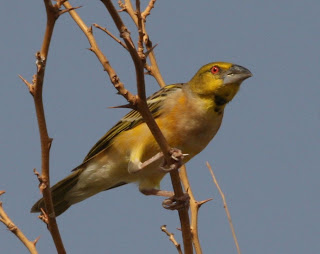 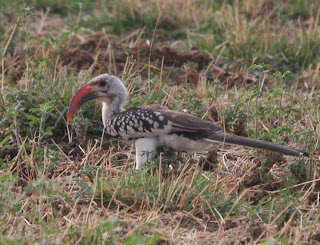