I met up with Terry Barry today who is a birder who has recently arrived in Khartoum, and we spent the morning at Tuti. The morning started well and within a few minutes of leaving the car we had seen a Lanner Falcon, a Purple Heron, a Black-crowned Night-Heron, a group of Lesser Black-backed Gulls and a couple of Yellow-breasted Barbets. The barbets were the first I have ever seen on the island; neither were very bright individuals and I assume that they were both immatures. 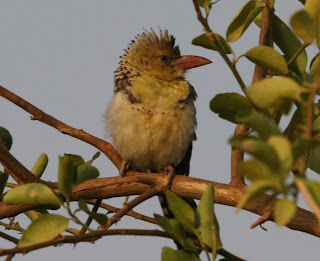 Yellow-breasted Barbet, Tuti 7th October 2011
However, as we moved up the island it was evident that there were fewer migrants than in previous weeks. There were still lots of European Bee-eaters, a few shrikes, a few Whinchats, a couple of Spotted Flycatchers, only a very few warblers, and some hirundines. There were more Yellow Wagtails this week, the first Tree Pipits I have seen this year and a Tawny Pipit. 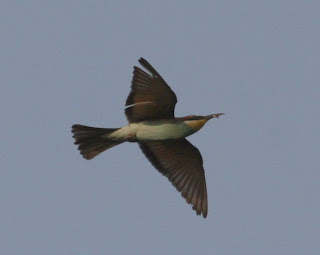