I visited Tuti Island this morning with Chris Wood. Without doubt the biggest surprise of the day was the dove shown below. It was clearly very different to anything we had seen before, but was most like a Namaqua Dove. It had a similar size and shape and flew in a similar manner. Also in flight it showed rufous patches in the wing, though in all other respects the colouration was completely different. The large amount of white in the tail made it look like a leucistic individual, though the rest of the plumage didn't quite give the same impression. On returning home and checking photos I realised that the bold Red orbital was not found on Namaqua Dove, suggesting it was either some domesticated version or another species entirely. I also considered the possibility of it being a Namaqua Dove hybrid with some other species. I checked through some field guides but didn't spot it, so put the photos on Birdforum to get some help. The responses soon made it clear that it was a Diamond Dove, which is an Australian species. In the wild they have browner backs, but they are a common cage bird and a quick check through the internet revealed many domestic individuals like the one below. Clearly it had escaped from somewhere in the city. 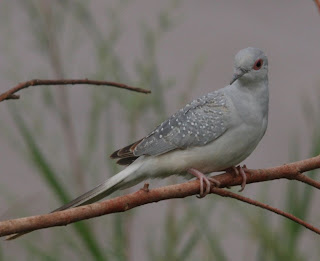 Escaped Diamond Dove, Tuti 21st October 2011
More expected was this Black-billed Wood-Dove. They are reasonably common on Tuti, but tend to be quite flighty and tend to be found in more wooded areas, so I have not had a chance to photograph one before. This one was feeding out in an open field, so it was easier to take a distant shot, though it flew as I tried to get closer. I wonder how often they are seen in Canberra. 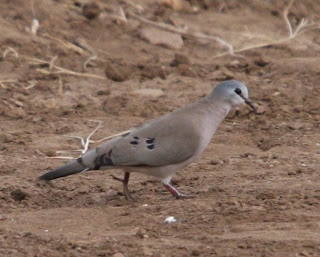 Black-billed Wood-Dove, Tuti 21st October 2011
There were a few new migrants in today, with my first Blackcap of the Autumn and a few other warblers around. There was a good selection of Wheatears, with Northern, Black-eared, Isabelline, and Pied, the latter being my first sighting on Tuti.  Another first for me on Tuti was the Lesser Kestrel shown below. A single juvenile Red-rumped Swallow allowed us to approach quite close and take some photos. 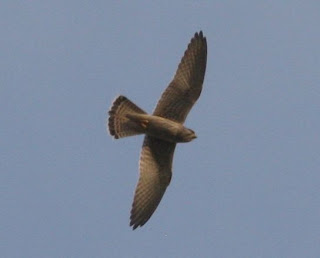 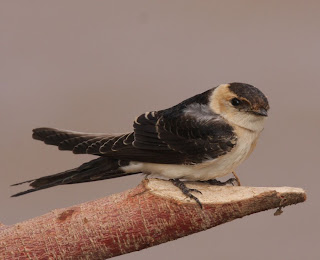 Red-rumped Swallow, Tuti 21st October 2011
After Tuti we headed down to the Sunt Forest. This is a well-known area of Acacia that is protected as a national forest. For much of the year it is flooded, which probably explains how it has survived so long so close to the city centre. This was my first visit to the area, though Chris has been many times mainly to look for shorebirds on the mudflats. Chris tells me that the water levels have been falling rapidly, but that there is still a long way to go. We only made a short visit to check out the status of the exposed mud. There were good numbers of Black-tailed Godwits, lots of Eurasian Spoonbills, some Yellow-billed Storks, some Pink-backed Pelicans, some Gull-billed Terns, and a variety of herons. There were lots of Spur-winged Plovers and a few other waders such as Greenshank, Marsh Sandpiper, Common Sandpiper, and Black-winged Stilt. Chris tells me the numbers go up rapidly once more mud is exposed and we look forward to some more visits.
Posted by Tom Jenner at 23:42