Over Eid I went  diving in the Red Sea. During the trip the wind was blowing strongly from the north all the time we were at sea,  varying over an estimated 30 – 50 km/h range. This made birding difficult and the use of telescope was impossible, even binoculars were problematic.
However, we did visit Sanganeb lighthouse (19o 43.35N 37o 26.6E) for an hour from approximately 11 am to midday. The lighthouse is approximately 19 km from the nearest coast. The base of the lighthouse is quite small, the open area (excluding the lighthouse tower) being about 20 x 15 metres with a long wooden jetty stretching out to deeper water.
There were a number of migrating birds on the island as well as on Osprey feeding on a fish at the end of the jetty, and a Green-backed heron feeding on the exposed reef. Around the base of the lighthouse I found 1 dead European Bee-eater, and living, 1 Red-backed Shrike, 1 Southern Grey Shrike, 2 White Wagtails, 1 Willow Warbler, 1 European Turtle Dove, 1 Namaqua Dove and  2 House Sparrows which probably live there. In addition a Chiff-chaff flew into the bridge of the boat we were on where I caught it for id before releasing it. The Willow Warbler, 2 doves and the Chiff-chaff all looked very stressed and probably would not have survived. There is no standing water and very little food on the lighthouse property and as migrating birds need water immediately on making landfall their chances of survival were small. The wagtails and shrikes may have been able to garner enough food in the form of flies and small insects.
At sea the wind and the accompanying 2 metre swell made birding difficult, but birds seen were both Sooty and White-eyed Gulls which took a while to distinguish from each other, Gull-billed Terns, Sandwich Terns, and what were probably Saunder’s Terns. The crew of the boat reported that pelicans commonly occur in Port Sudan harbour and had been the day before we arrived, but they were not there when we were. Probably Great White but no positive id.
Of interest on the drive from Khartoum to Port Sudan was the number of Egyptian Vultures in the vicinity of Haiya. I counted 16 in the few kilometres before and after the town. 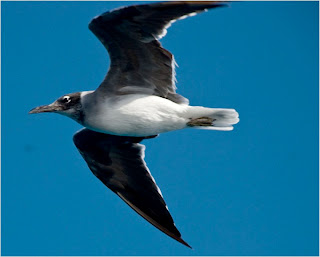 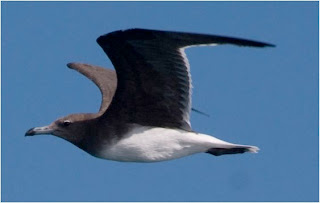