Walked the complete circumference on Tuti Island starting at 0730 and finishing at 1230. Weather fine and cool by Khartoum standards with no significant wind.
Birding quite good with small numbers of waders and some interesting other birds. It was good to find 5 Senegal Thick-knees about 2/3 of the way up on the north western side. The only waders in any number were approximately 50 Black-winged Stilt standing in shallow water on a sandbank in the middle of the river. Also saw my first, for Tuti Island, Blackcap.
Pushing my way through a dense grove of lime trees, almost on my hands and knees, I disturbed 3 Long-tailed Nightjars, a new bird for me. I did manage one photo in deep shadow under the trees. I have extensively “photoshopped”  it to try and bring out the bird.
It  was good to see an Egyptian Plover again on the island. Looking back at my records from last year I recorded 12 on 17th October 2010 and 6 on the 2nd November. This year I have only seen 1 in September and now 1 in November. They do move with changing sandbar exposure but it does seem a bit strange that they have not been here in any number this season.
I also saw one Yellow-billed Egret. Khartoum seems to be just about the northern limit of its range according to Nikolaus. There is a heronry in the trees outside the Corinthian hotel (ex Burj al-Fateh) and I have occasionally seen one or two coming in there in the evening.
Brown-throated Martins seem to have begun excavating nesting holes in the sand cliffs since I was last on the island. In some place they appear quite far advanced. The Stonechat seen was probably a Siberian stonechat, but not completely certain on that. 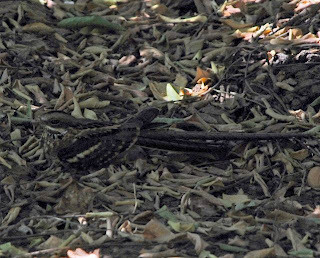