Last Friday (the 24th) I made a quick trip to Tuti Island with Stephen. As with my previous visit, the water levels were high and heavy rains a few days earlier limited access to some parts of the island that we usually visit. There were definite migrants around, such as Common Swifts, plus other birds that were probably migrants such as Great and Little Egrets, a Hoopoe and a Rufous Scrub Robin. I say probably because I have seen all of these species in June and I wonder if some or all are present in small numbers over the summer. As with my last visit, there were a couple of rollers present. Neither had tail streamers, but both had quite a lot of white around the face, which is an Abyssinian feature. On photographs of the first bird the blue flight feathers could clearly be seen, proving it to be an Abyssinian. Just as we found the second bird my camera packed in. As the bird flew away it appeared to have darker flight feathers, but I could really not be sure. European Rollers are supposed to be quite common migrants at Tuti, but I have yet to see one. Indeed I have not seen this species at all since 1979! That ages me. 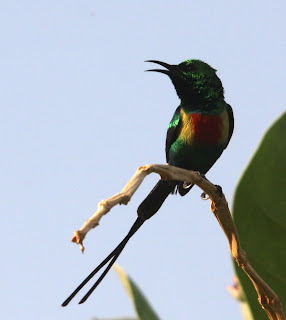 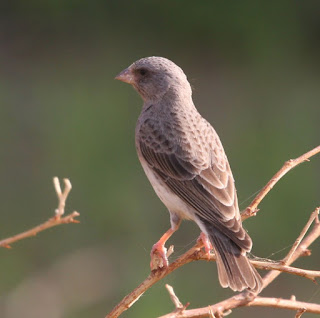 A couple of Speckled Pigeons flew overhead. These were my first on Tuti, though Terry reported them several times here over the summer. There were few opportunities for photographs before my camera packed in, but I tried to get a few shots of the Greater and Lesser Blue-eared Starlings with limited success. I have never had much luck photographing these species, but I will soon publish the few shots I have with some discussion of how to identify this difficult pair.
Posted by Tom Jenner at 22:58