Today I made my first visit to the Khartoum sewage treatment plant which lies to the south of the city. I went there with Marwa, and on the way there she discussed how she felt sure she had seen Red-knobbed Coot on a previous visit, but that people had told her she must be mistaken. As soon as we arrived we looked out across the pools and saw several coots. It didn't take long before we had good views and it was obvious that they were all Red-knobbed (or Crested) Coots; a species not previously recorded from Sudan. There were about 25 in total, on two of the 6 big pools. 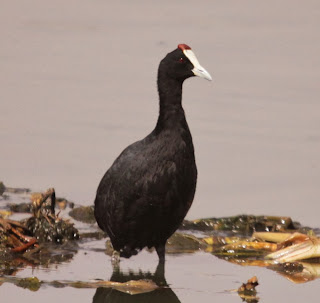 There were also quite a few ducks present. One looked like it might be a Red-billed Duck, but they were a bit distant and we needed to set up some nets for bird ringing, so we decided to check them properly later. On our return we went to check one of the pools and the ducks were no longer there. At the second pool we quickly flushed a number of Red-knobbed Coots and Southern Pochards from the bank close beside us. There were 6 Southern Pochards and, like the bird seen in Bahri two weeks ago, they were all males. Unfortunately, there was no sign of a Red-billed Duck, but there were 3 Tufted Ducks, which I believe are my first sightings in Sudan. I took a few photos and when checking them at home, I saw a bird in the background that may also be a new record for the country - a Cape Teal! Unfortunately the photos are not good as the bird is only in the background. I will need to get it verified, plus I will try and return soon to check on it. The two main pools also had some Hottentot Teals - with 3 on one pool and 2 on the other.
(Later Edit: Having checked with people on Birdforum it is evident that this is not a Cape Teal. The main feature suggesting this species was the apparent red bill, but it seems that this is probably a trick of the light. It is probably a Gargany or Common Teal). 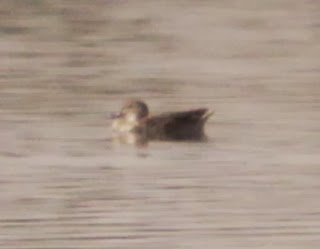 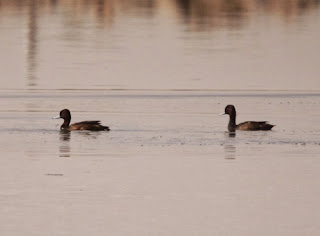 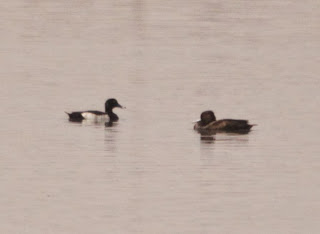 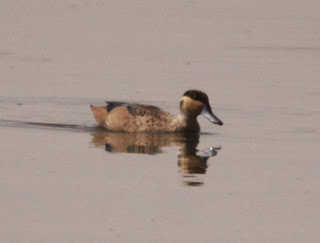 Other good birds present included African Swamphen, hundreds of Moorhens (including many juveniles), lots of Little Grebes, Lanner Falcon, and Marsh Harrier. We had little luck with the nets, but this was not much of a concern given the good birds we had seen. In the published literature Sudan has no records of Red-knobbed Coot, nor Cape Teal, there is one record of Hottentot teal and one record of African Swamphen, plus Southern Pochard and Red-billed Ducks are very rare this far north. Admittedly the Cape Teal awaits confirmation and I need to return and check on the Red-billed Duck, but this will be a great haul of good birds regardless of whether or not they are confirmed. I can see us making regular trips here and Marwa and I have already discussed preparing our combined sightings for publication. Birders further north in Egypt may want to start checking some sewage sites in the south of the country to see if these birds go any further north. We already know that the Swamphen does.
Posted by Tom Jenner at 21:11