Searching for wetlands in Omdurman

For the last few months Marwa and I have been having amazing success birding at wetland sewage sites in Khartoum and Bahri, but we had still not been anywhere in Omdurman. I searched the internet for any information about sewage sites in Omdurman, but nothing came up. I then resorted to searching Google Earth for potential sites. It was soon pretty clear that there was no major sewage works in the city, but a number of smaller wetland sites looked worthwhile. The map below shows the main locations I hoped to visit. Marwa and I met up with Shazali, a Biologist from Omdurman who is currently working in Juba South Sudan, but was luckily in town today. He took us to the first location (marked A). Shazali told us that it is quite a large pool during the wet season, but that it mostly dries up throughout the year. Today it was down to a couple of small ponds and was clearly very polluted as it lies right in the middle of a built up area and is used to dump rubbish. The only birds around were House Sparrows. This information let us know that the Google Earth satellite photos were taken in the wet season and that many of the areas shown would probably only be seasonal wetlands. 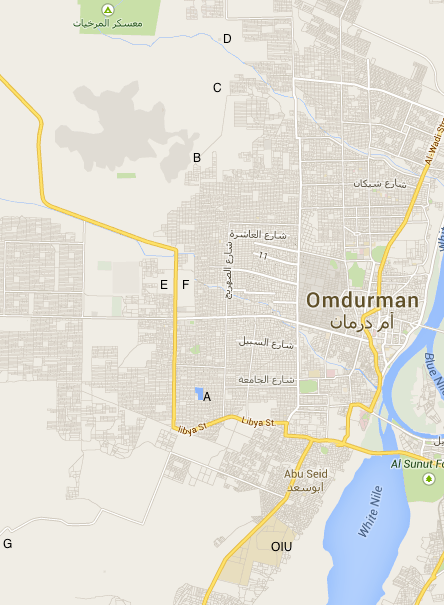 Potential wetland birding sites for checking in and around Omdurman

We then headed up towards the north of the city. We by-passed the locations marked E and F, which appear on the satellite image to be smaller versions of A, and which Shazali assured us would be dry. The location marked B was much more interesting. There is a major underground water pipe that sprung a leak 4 years ago and which they have been unable to fix. This has resulted in the formation of a small stream that runs down the hill and forms several small pools, the biggest about 30 m across. There were some small patches of reeds (bulrushes rather than the type we find at the sewage sites) and a bit of open water. There were surprisingly few birds around considering the arid surroundings and water availability, but we did see a Little Grebe and a couple of Little Swifts, plus a few other commoner species. We headed further north to check out a group of small pools (location C) that from satellite images appeared to be very similar to the sewage pools I regularly visit near Soba Hospital. They were hard to find and when we asked around we soon found ourself at location D, which is the main water treatment facility in Khartoum State. There was no open water at the site, but it was interesting to find a dead Barn Own on the ground. Apparently they see them there regularly. Nikolaus describes them as uncommon, and I have not come across them before in Sudan. We headed back down to the pools at location C and found them to be water ponds for a cattle farm, with no surrounding vegetation and no real interest ornithologically.

We then headed to the south of the city, to an area beside Omdurman Islamic University (OIU on the map). It was hard to find, but well worth the effort. It is clearly quite a large wetland in the wet season, but the southern end appears to be a small permanent wetland created from sewage - presumably from the university. The whole area is only about 1 or 2 hectares, but about half of it is thick reed beds and the rest an area of open water. We quickly saw a few Hottentot Teals and several Common Moorhens, including lots of juveniles. There were some Northern Masked Weavers in the reeds and a few shorebirds around the edge of the pools, including some Kittlitz's Plovers. There were lots of Chestnut-backed Sparrow-Larks, including some juveniles. Migrants included a European Bee-eater and a Common Hobby hunting over the pools. 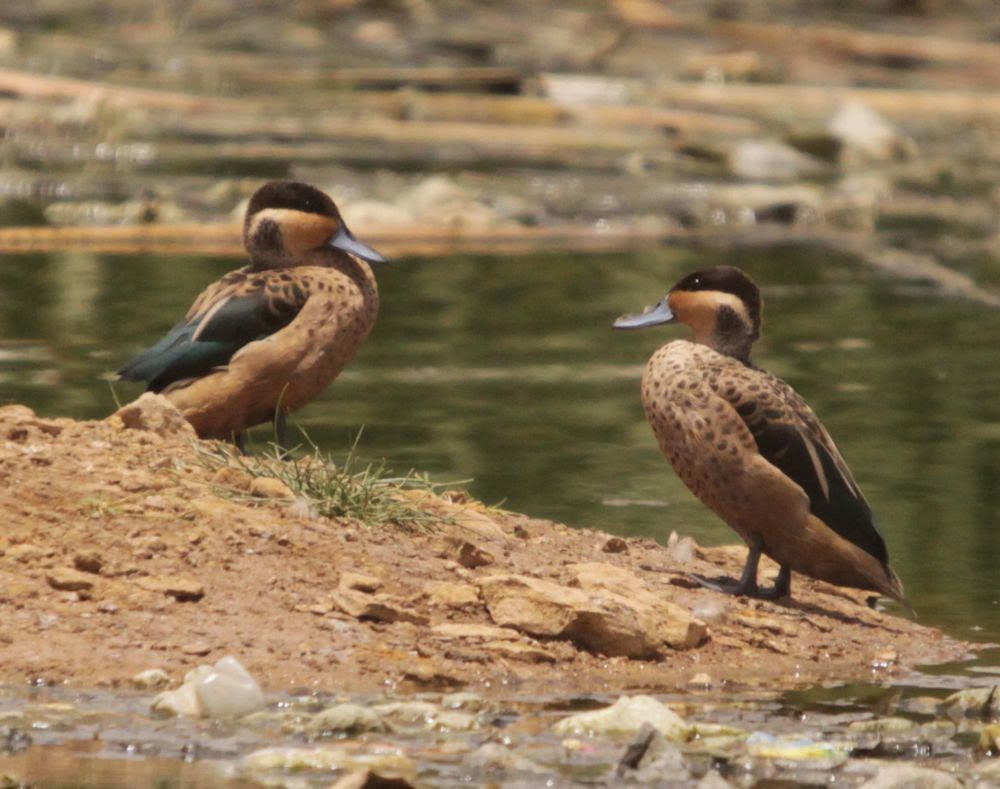 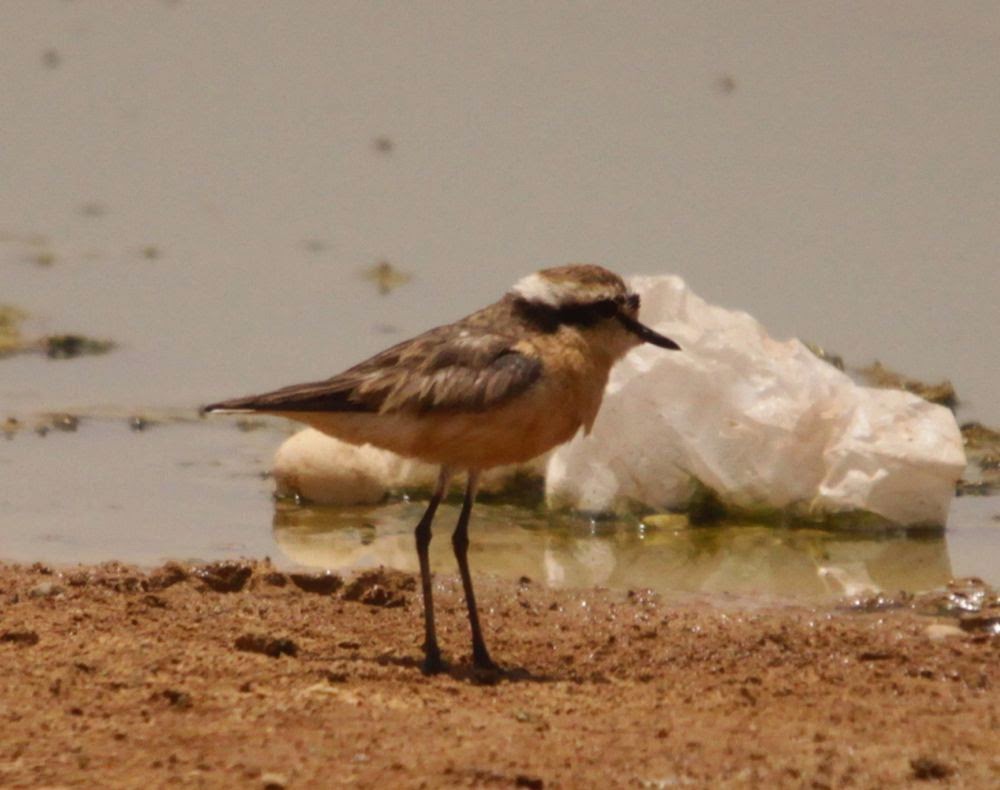 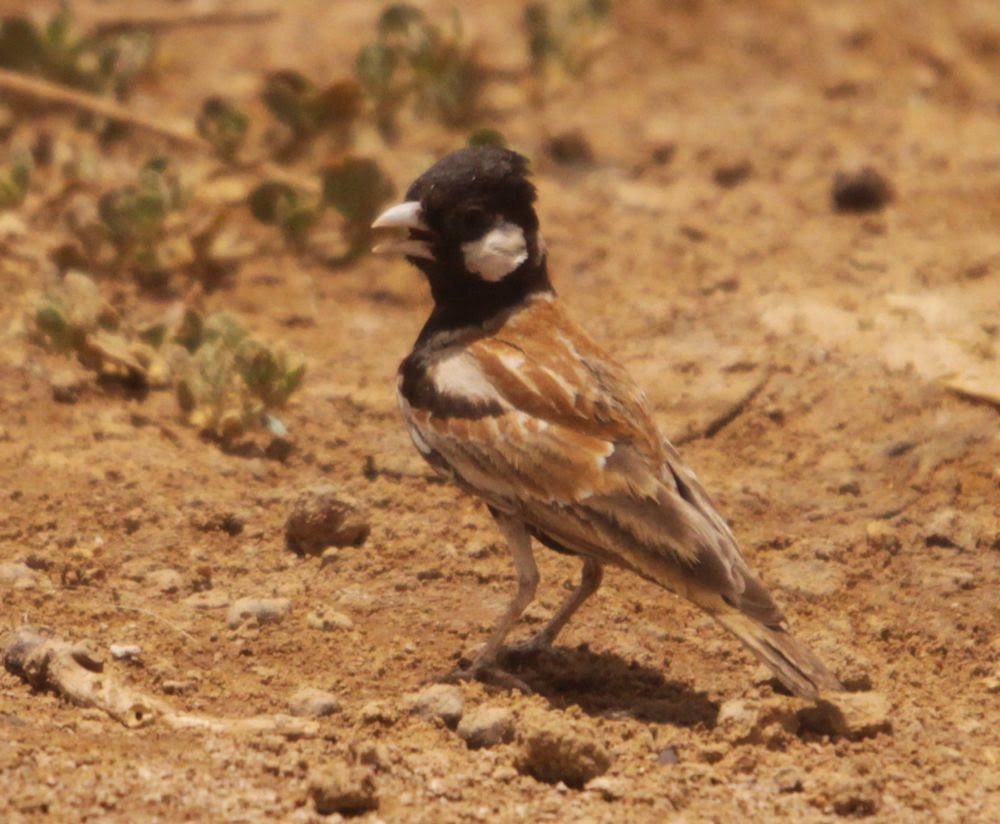 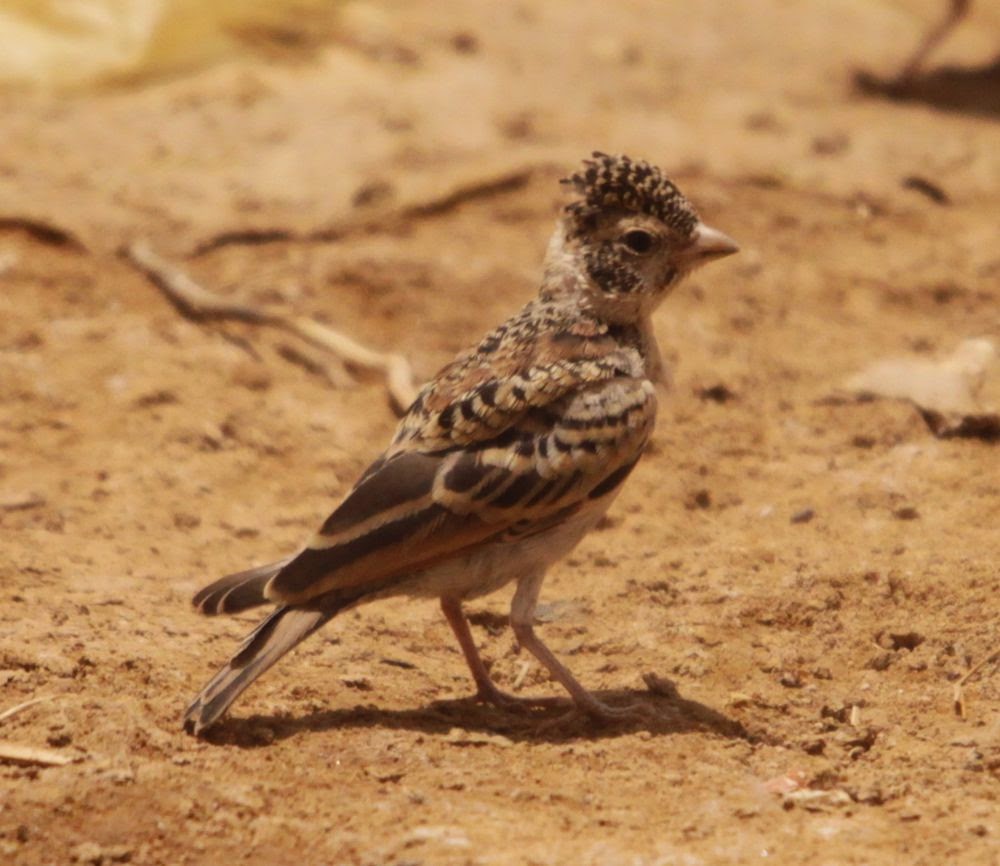 We ran out of time at the end and were unable to visit another small group of pools lying south-west of Omdurman (location G). I hope to check these some time in the near future. I also hope to return to this new site at Omdurman Islamic University to see what is present in the early mornings.
Posted by Tom Jenner at 21:09