We must be nearing the end of the breeding season for the Northern Masked weavers at Bahri, because some of the males have started moulting out of their breeding plumage. I first reported them nesting way back in early February, making it a long season. However, a few birds are still building nests, so it is not yet completely over. Looking at the birds this weekend it was noticeable how worn the wings had become. The very high population density at Bahri means that I don't get many recaptures of ringed birds, but on Friday we caught two - I photograph the wings of every bird I catch, so this gave me a good opportunity to see how their wings have changed. 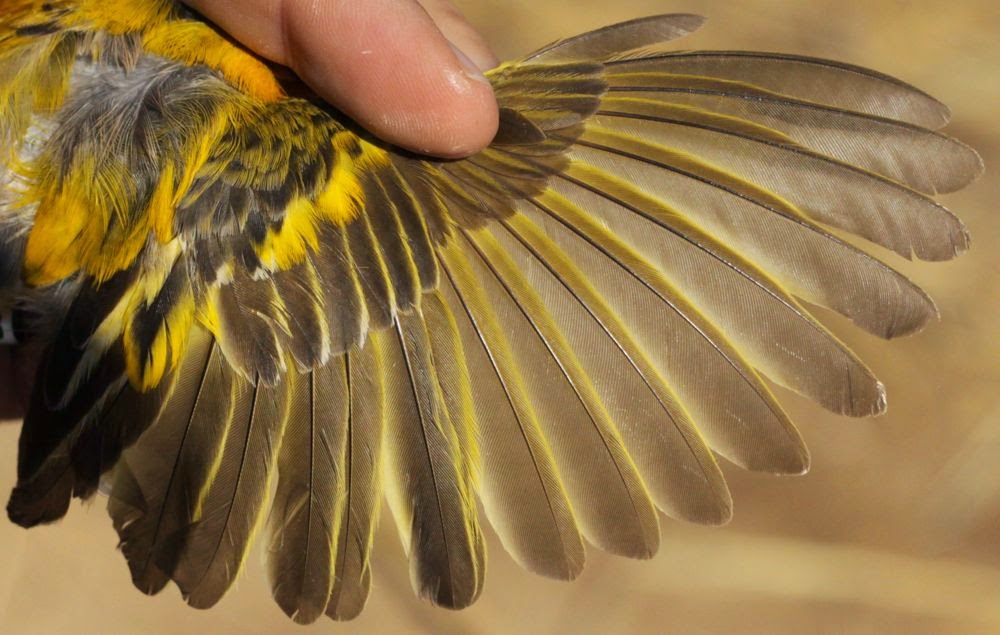 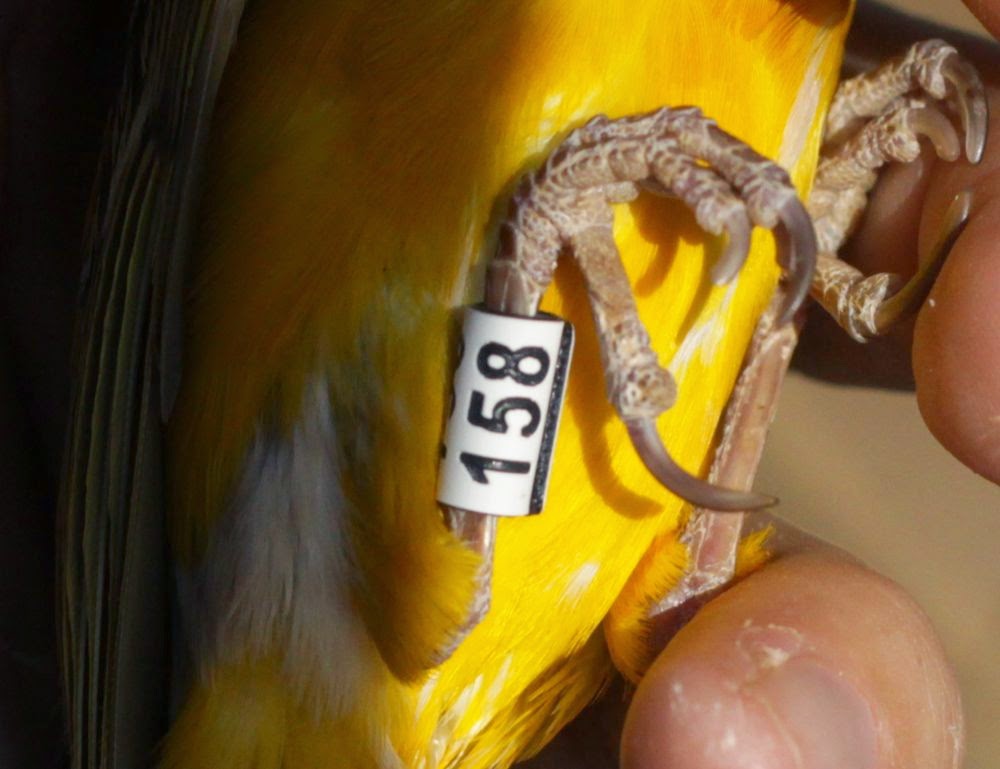 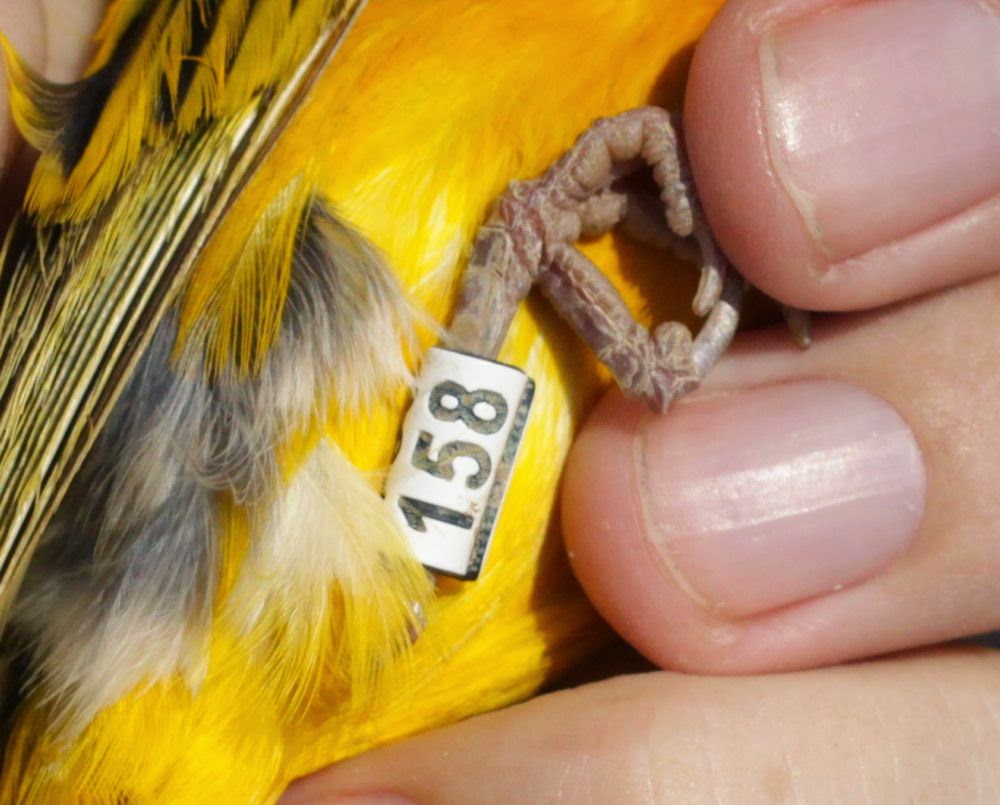 The ring of bird 158 in September

Bird 158 (above) was first caught back in March, and then again on Friday. It is clear from the two photos that in the last 6 months the feathers have become highly abraded at the ends, have faded a lot, and that some ends have broken off completely. The effects of bleaching by the sun are equally evident on this bird's leg ring (above). One reason I include the ring shot is to prove that they are the same bird. The above wings are so completely different that I twice went back to my original photos (which include a series of head and body shots), to make sure that there was no mistake. Presumably the greater coverts have been changed recently, as they had narrow white edgings in March and thicker yellow ones in September. 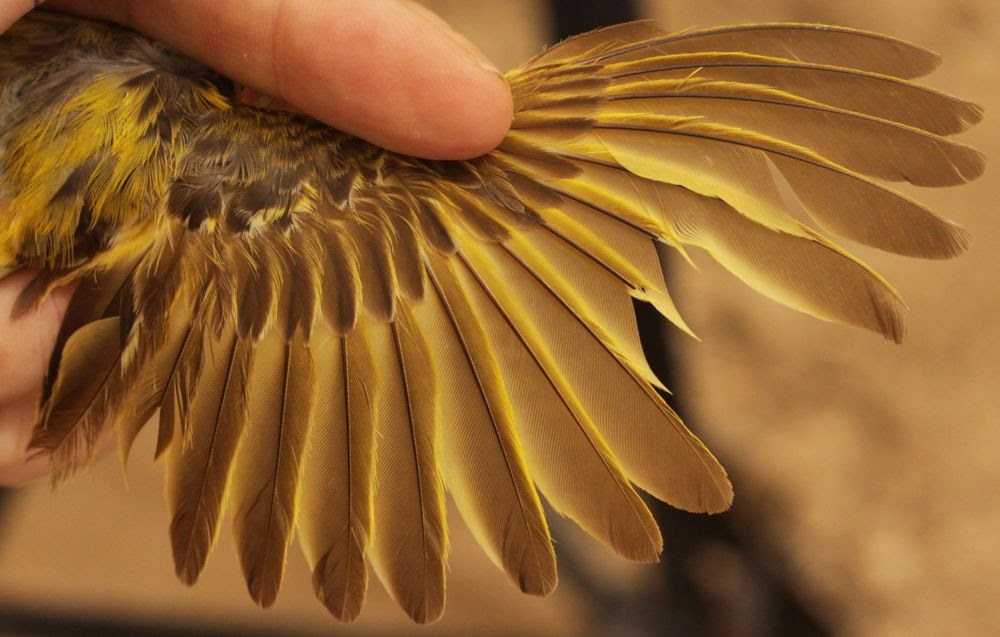 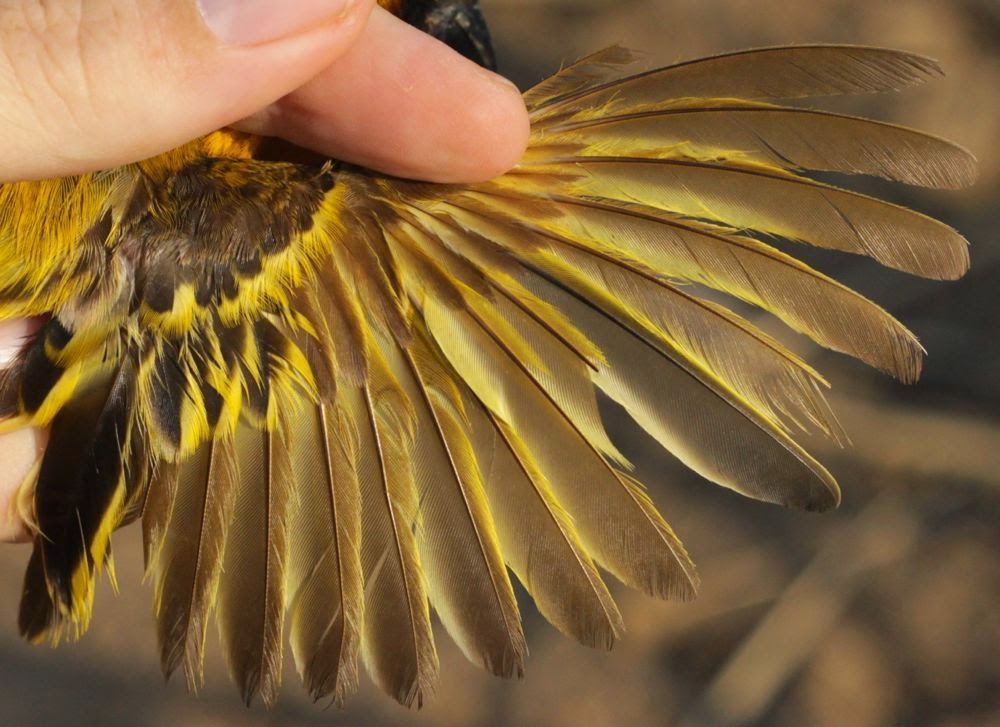 Bird 291 (above) was already looking quite tattered back in May. In the last few months there has been a lot of additional wear to many of the feathers, but there has also been some attempt at repair, as the broken primary 7 (numbered ascendantly, where the outermost feather is number 1) has clearly been replaced. There was no other sign of primary moult, so this was just a single replacement. However, the tertials and greater coverts are dark centred with bright yellow edgings and therefore must also be new. 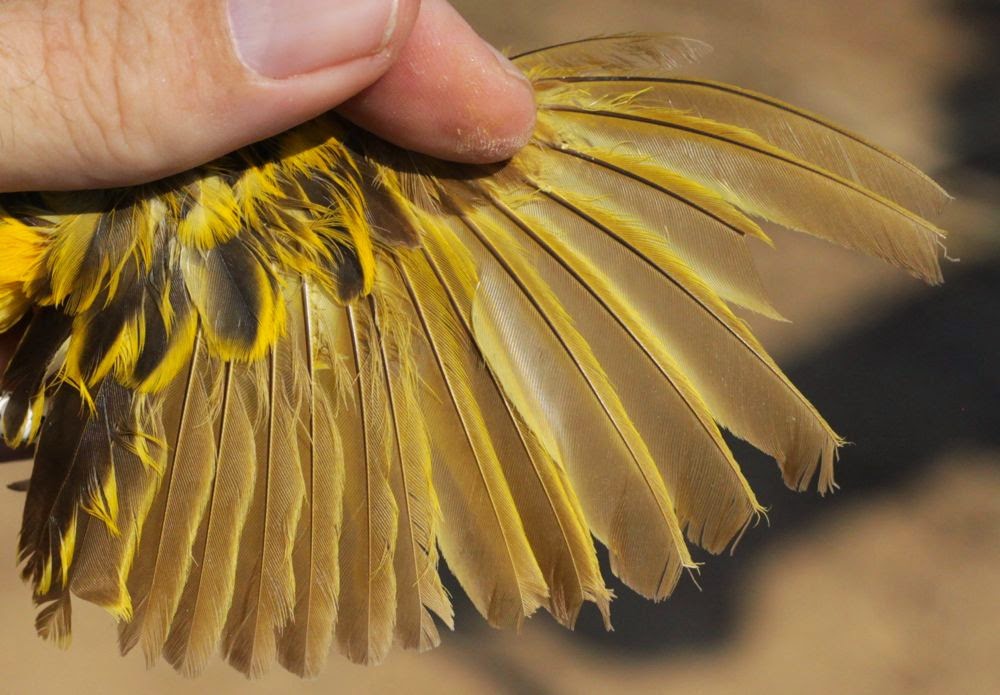 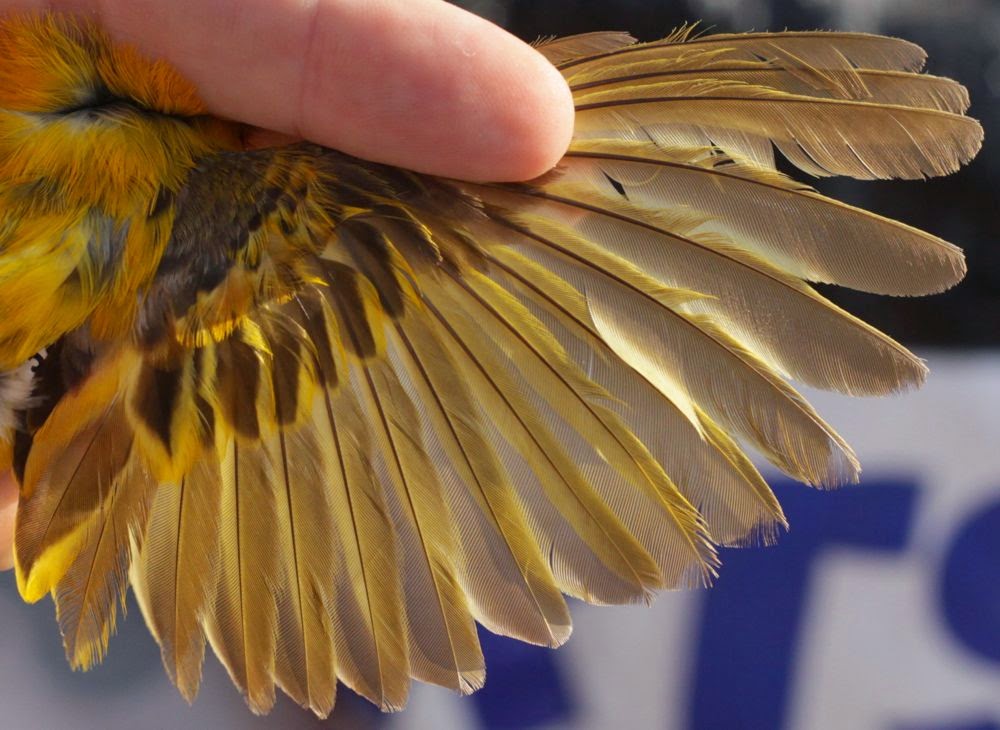 Many of the other males (above) also showed extensive feather wear and damage. However a comparison with some of the females (below) shows that they seem to have suffered far less. 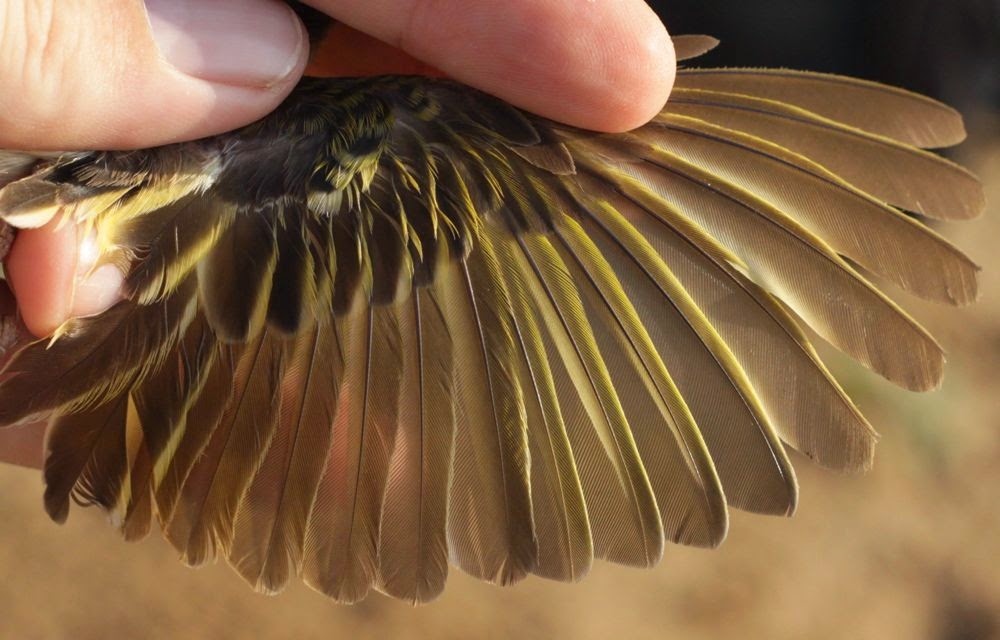 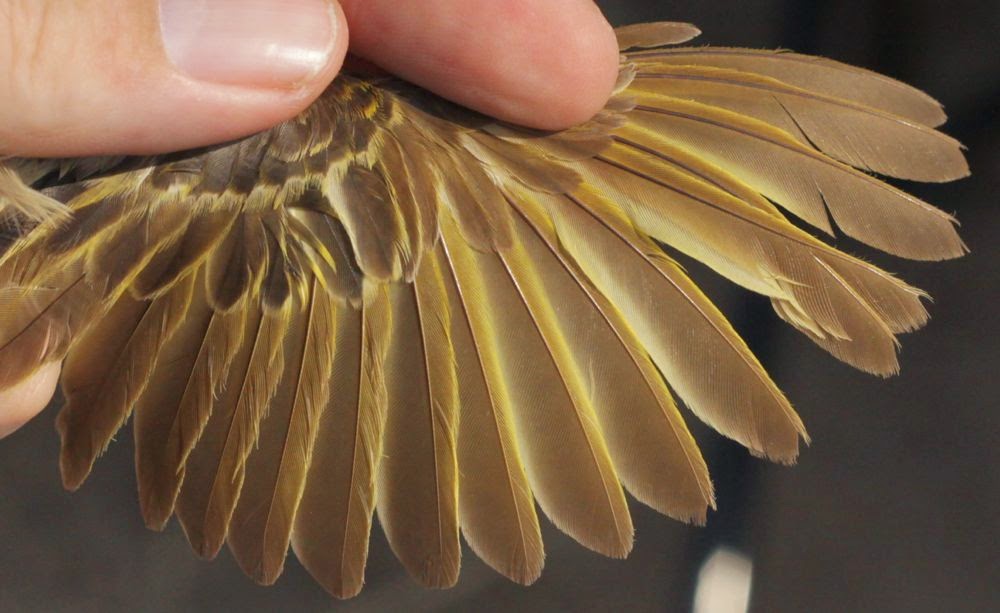 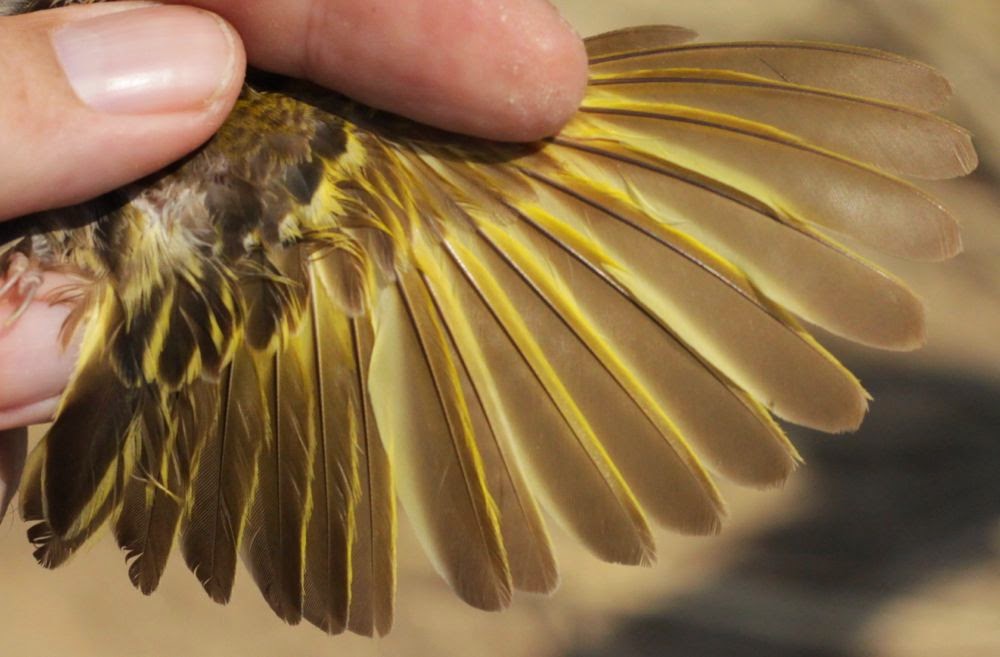 Although these females have received a lot of abrasion, they lack the more extensive damage seen on most of the males. There must be some behavioural difference causing this such as the activities of males during nest building, or display - where the males hang under nests and flap their wings whenever a female passes. The brushing of the wings on surrounding branches during display must cause some of this damage. There could also be damage caused by aggressive interactions between males, though this is something I have not seen much of, or it could just be that they spend so much time building nests and showing them off to females, that they have little time for feather care. 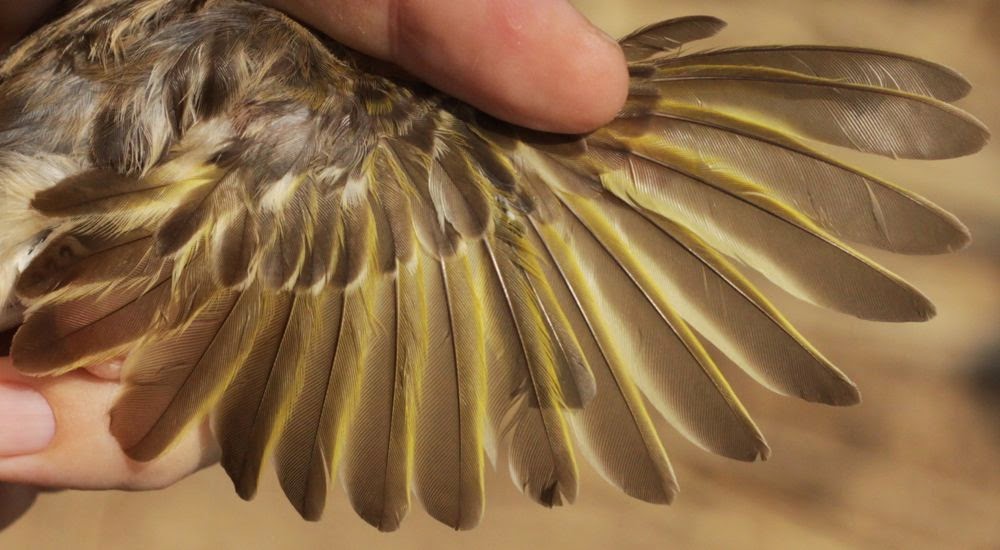 Juvenile weavers (unlike many other passerine families) have a complete post-juvenile moult, which means that when they moult out of their juvenile plumage they also change their flight feathers (which most passerines do not do). From what we have seen above we know that a lot of wear will occur in the coming breeding season, which helps explain why these birds need to moult their juvenile primaries to ensure that they will last the rest of the year. Juvenile number 333 (above) had already starting to moult its flight feathers (9 is in pin, 10 is three-quarters grown, while 1 to 8 are the old juvenile feathers). However, this bird still has fresh primaries that will easily last it for the next few months, which raises the question of why they need to moult them now. Surely a better strategy would be to moult them at the start of the breeding season, which is when they will already be moulting their body feathers into alternate (breeding) plumage. They would then have a new set of primaries that could more easily cope with the wear and tear of the coming nesting season. I wonder why they do not do this.
Posted by Tom Jenner at 23:07