The most visible migration at Tuti this weekend was several groups of herons heading south. Most numerous were Grey Herons in small groups, with larger groups of 20 to 30 individuals. One small group included a Purple Heron. A group of 13 Black-crowned Night-Herons flying over was the first I have seen in the country. A Eurasian Spoonbill flyover was also the first I have seen here, though on an earlier trip Mark Mallalieu saw an unidentified Spoonbill, which may have been an African (based on the dates in Nikolaus). 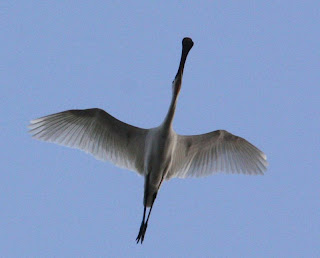 Eurasian Spoonbill, Tuti, 15 October 2010
Nikolaus describes Pallid Swift as rare anywhere in the country away from Jebel Marra (hills in Darfur), though he does include a sighting from Khartoum. There were several flying around over the north end of the island, allowing poor but identifiable photos. 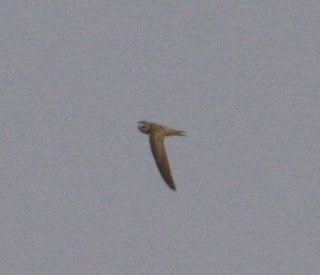 Pallid Swift, Tuti 15 October 2010
New passerines included Common redstart, Blue Rock Thrush and Chiffchaff. There were still quite a few Lesser Whitethroats around. There were several large kettles of soaring Kites, each numbering several hundred. I wondered whether these might have been migrating Black Kites, rather than the resident Yellow-billed Kite shown in the photo below. They were flying too high to be sure. Many authorities now regard these two forms as separate species. 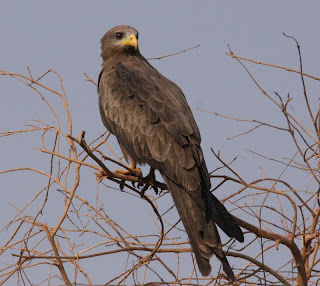 Yellow-billed Kite, Tuti 15 October 2010
Another interesting raptor that showed well was a dark morph Gabar Goshawk. It was in the same tree as the pale morph bird I photographed a couple of weeks ago and published here. 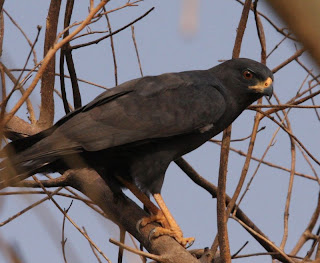