Today I made my first visit to Jebel Aulia, a large reservoir on the White Nile about 40km south of Khartoum. We were visiting a new camp (Escape) that has just opened on the lake, run by Pantelis Tiritas. It was a work trip and I only had 45 minutes to wander off and do some birding, but there was plenty to see in that time.
A few waders were on a marshy patch beside the lake and included Kittlitz's Plover. Quite a few migrants were in the bushes around the camp, but given the time it was hard to identify many. Common Redstart, Lesser Whitethroat, Masked Shrike, Tree Pipit, and Spotted Flycatcher were identified, alongside resident species such as Eastern Olivaceous Warbler, Abyssinian Roller, and Nile Valley Sunbird. 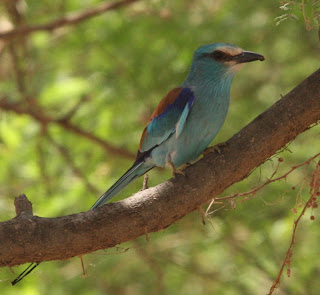 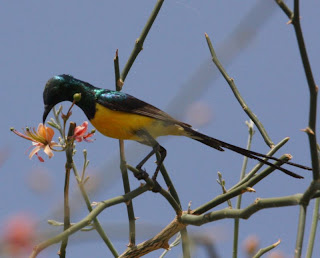 Nile Valley Sunbird, Jebel Aulia, 8th October 2010
There were Yellow Wagtails scattered around the area that mostly appeared to be the M. f. beema subspecies (Sykes Wagtail). A flushed Long-tailed Nightjar gave good flight views, showing much warmer colours than is represented in the guides. Unfortunately, it proved to be a bit tough to photograph when it landed. By contrast, a group of Ethiopian Swallows gave great views as they sat on the jetty and let me approach quite closely. This individual still has a fleshy gape indicating that it recently fledged. 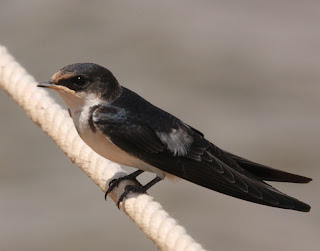