Tuti and Blue Nile with Juha

Once again, I had the chance to visit Tuti Island with a different companion. Juha is visiting from Finland for the second time this year and joined me for some birding. There were no new species to report from Tuti this week, but there were still birds that seemed to be new arrivals. There were good numbers of Lesser Whitethroats and Blackcaps. There was a Red-backed Shrike and several Masked Shrike, that were mostly in juvenile plumage. Northern Red Bishops were still displaying; they will soon lose their bright plumage and look more like the females. 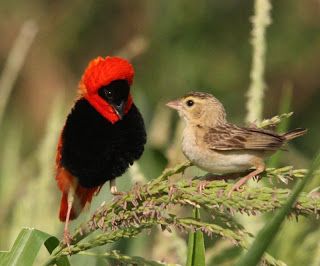 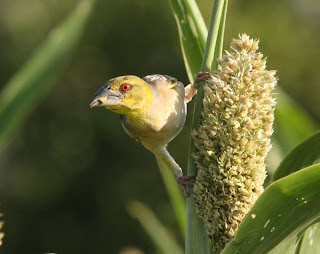 Village Weaver, Tuti 22 October 2010
Later we had a brief visit to the Salam Center for Cardiac Surgery, where Juha is based. The grounds were good for birds, with Blackcaps and a Common Redstart in the garden and several waders on a pool near the Blue Nile. Best bird was a Short-toed Eagle that Juha picked up as it hovered over the opposite bank of the Nile, perhaps 1km away. We scoped it for about 10 minutes and finally saw enough to confirm the identification. I imagine he will pick up other interesting birds here and I look forward to hearing what he finds.
Posted by Tom Jenner at 20:37