The other day I visited the pyramids at Meroe with my family and some friends. The habitat is much drier than I have seen around Khartoum and immediately apparent was the low numbers of birds in the region. There were very few birds seen on the 4 hour drive each way and there were only a handful of species at the pyramids themselves. One good species was Desert Sparrow, which seemed quite common in the area near our campsite which was in desert scrub just south east of the pyramids. The species is described as uncommon to rare in Sudan by Nikolaus (1987). One pair was building a nest and another was feeding young. The only other species I saw there were Laughing Dove, Desert Wheatear, Isabelline Wheatear, African Silverbill and Southern Grey Shrike. I also tried searching for nightjars at night with a torch by looking for eye-shine, but without success. 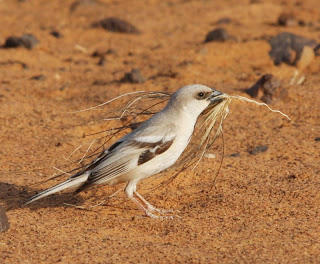 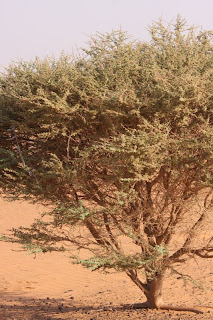 Nest tree of Desert Sparrow. The nest was in the dark
gap just above the middle of the photograph. 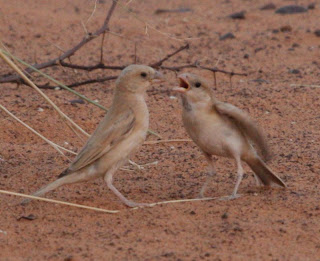 Female Desert Sparrow feeding young
Meroe, 18th November 2010
On the way back we stopped off for some lunch beside a large boulder outcrop about half way between Meroe and Khartoum. I had half an hour to pop out and check for birds and immediately had some good luck. There was a group of Crag Martins flying around the outcrop, plus a number of Striolated Buntings on the boulders and in the dry desert scrub at the base. This species was recently separated from the closely related House Bunting that is found in north west Africa. 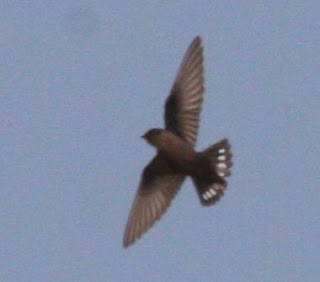 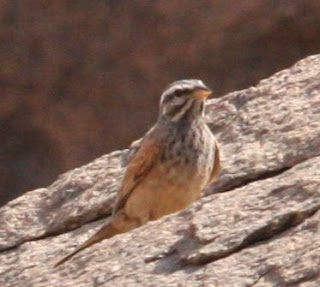 Striolated Bunting, Road to Meroe, 19th November 2010
Also in the area was an interesting wheatear with a red rump that appears to be a Kurdish Wheatear. This is the first I have ever seen and I am still trying to get confirmation of the identification from people on birdforum.net. A Pied Wheatear was at the base of the rocks and a species I have not seen in Sudan before. There were also several common species around plus a pair of large falcons that flew over but too distant to identify. I wonder what made this patch so much better for birds than the site at Meroe. 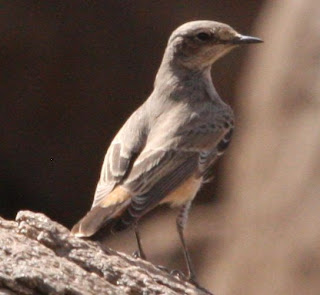 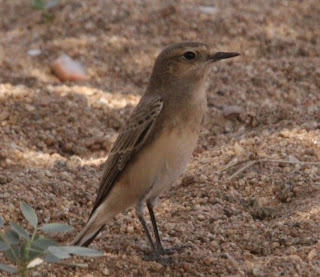