I made my second visit to Fenti golf course today, with Mark Mallalieu who is visiting Khartoum briefly from Juba. One species we saw early on was Black-rumped Waxbill. It was only my second sighting of this species (my first was beside the Blue Nile) and the first for Mark. There had clearly been a lot of movement of migrants. There were Red-throated Pipits scattered around the fairways on my last visit, but none this time. Where there had only been one White-winged Tern last time, there were now about 20. The mix of waders was different. There were no Northern Redstarts this time and only one Chiffchaff. Siberian Stonechat was the first we have seen in the country and Pied Wheatear had not been present on my last visit. There also appeared to be more Northern Wheatears. 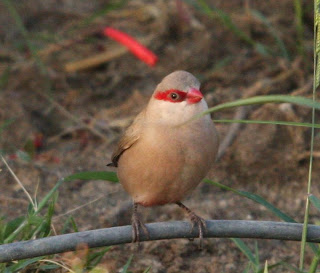 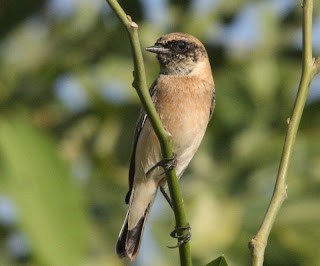 Siberian Stonechat, Fenti November 27th 2010
However, the most noticable thing was the change in the Yellow Wagtails, Motacilla flava. This species has many different subspecies and large numbers of them clearly migrate through Fenti. What makes it harder is that there are also some intergrades that show characteristics of more than one subspecies. Some of them are bit hard to identify and I may have made some mistakes, so please let me know if you think any are incorrect. Some individuals were also a bit hard to approach on the open fairways, so please forgive the poor photos.
Up until a few weeks ago I had only been seeing beema (Sykes's Wagtails), and there were still a couple around today.  On my last visit to fenti I had also seen a couple of feldegg (Black-headed Wagtail), which is sometimes treated as a distinct species.  There had also been a Black-headed Wagtail with some white on the supercilium that I was unable to photograph.  We saw the same bird (or similar) again today, but again it was impossible to get a photo. it suggested superciliaris, but did not have a full supercilium as shown in the guides. I hadn't looked at them closely before, but I think I also saw a couple of lutea (Yellow-headed Wagtail) on my last visit and there were several around again today. 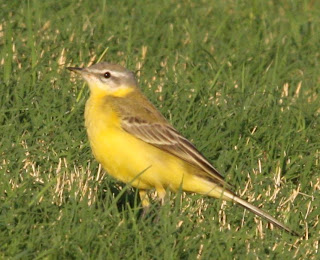 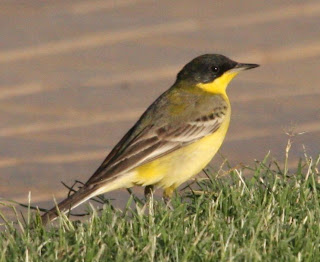 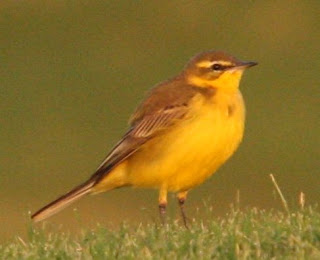 M. f. lutea, Fenti November 27th 2010
The biggest change today was the arrival of birds that were superficially like Black-headed Wagtails, but on closer inspection had only a black face and a grey crown and nape. This suggested that they are thunbergi, Grey-headed Wagtail. However, even within these birds there was a lot of variation. A couple  had white on the malar (suggesting melanogrisea) and one also had it just above the lores. Yellow Wagtail expert Christopher Bell pointed out (on Birdforum.net) that the large bill of this bird was not typical of thunbergi (which has a short, spiky bill), but was more reminiscent of the larger billed southern subspecies feldegg or melanogrisea. Another bird had a hint of a white supercilium just above the eye, separating a greyer crown from blacker ear coverts (suggesting cinereocapilla). However, Christopher thought that this last one is just a variant of thunbergi. I didn't even think of looking at the females (that seemed to be fewer in number than the males). 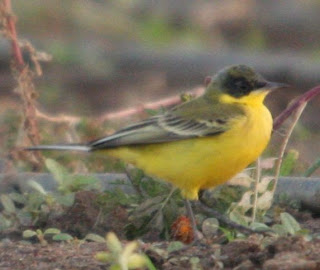 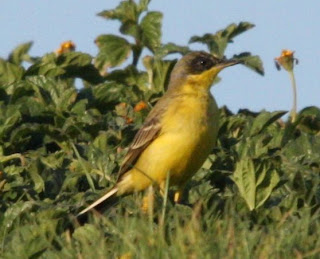 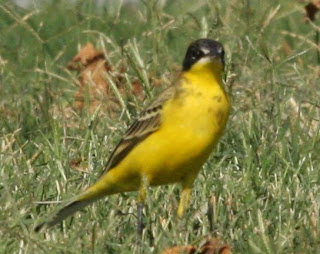 A large-billed wagtail resembling thunbergi, but with white on the tops of
the malar and above the lores, possibly a variant of feldegg or melanogrisea,
Fenti November 27th 2010 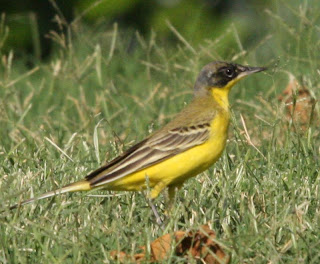 The same individual shown above, but in side view to show its similarity
to M. f. thunbergi, but also its large bill, Fenti November 27th 2010 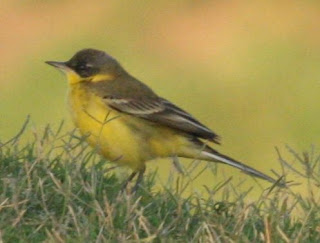 M. f. thunbergi, but with a hint of a supercilium making the ear coverts appear darker
making it resemble cinereocapilla, Fenti November 27th 2010
The last one is probably also lutea. However, it has a white supercilium, rather than a yellow one. 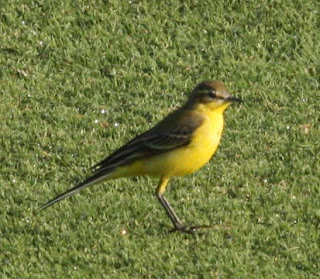 
I want to thank Christopher Bell for helping make corrections to an earlier version of this post. His discussion of the photos can be found on birdforum.
Posted by Tom Jenner at 21:41