My second visit to Sabaluka - The Sixth Cataract

I made my second visit to Sabaluka last weekend, accompanied by Joop Vrielink a visiting birder from the Netherlands. After turning off the main road into the desert we quickly came across a group of Black-crowned Sparrow-Larks plus a few Desert Larks. The characteristic insect-like call of a Cricket Warbler could be heard from the nearby Acacias and Joop was soon able to get views of this sought after species. A less expected sighting was a group of migrating Great White Pelicans that was circling above us. 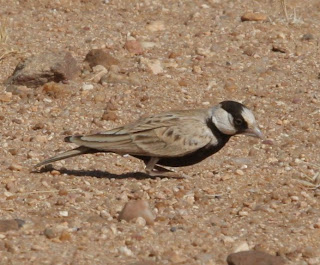 Black-crowned Sparrow-Lark, Sabaluka 19th March 2011
Northern Masked and Village Weavers were both busy building nests and it was possible to get good views of both as they fed on crumbs from the family picnic we were having. Eastern Olivaceous Warblers were also very active in the bushes around where we were resting, as were White-headed Babblers. 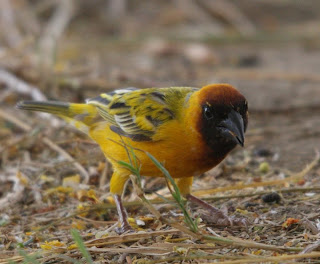 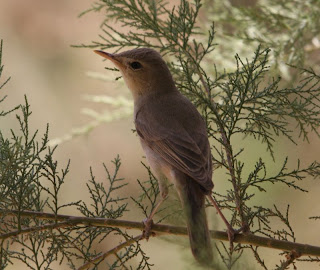 Eastern Olivaceous Warbler, Sabaluka 19th March 2011
There were not the big numbers of migrants that I had hoped to see, but we spotted a few interesting species. An Isabelline Shrike was the Central Asian subspecies sometimes referred to now as Daurian Shrike. We saw a male Common Rock Thrush and a Eurasian Reed Warbler, which first had us a bit confused as it looked a bit like a large Hippolais warbler. There were a few terns feeding on the river and we had distant views of three Egyptian Plovers. 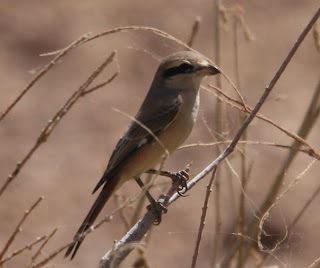