Yesterday I made a brief visit to Tuti Island with Joop as it was his last day before heading back to Holland. All of my previous visits have been in the morning and this was the first time I have visited in the evening. It was noticeably quiet when we arrived at about 4:30 and I felt that we would not see much, but things picked up considerably in the last hour or so before dusk. Of particular note were the very large numbers of African Palm Swifts throughout the island, numbering several hundred. It was hard to be certain, but they gave the impression of being migrants. However, this begs the question of where they would be migrating to as their range does not extend much further north and they are residents here in Khartoum. There were also singles of Little Swift and Common Swift (surprisingly, my first in the country). 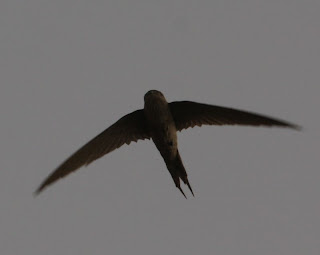 African Palm Swift, Tuti, 23rd March 2011
The northern end of the island appeared to have the majority of the migrants with quite a few Northern and Black-eared Wheatears, a Eurasian Hobby (my first in Sudan), and a Rufous Scrub Robin. There were around 20 Red-rumped Swallows that were clearly heading north, which were also my first records in the country. 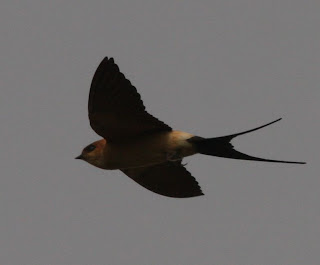 Red-rumped Swallow, Tuti, 23rd March 2011
Also notable were the large flocks of Sudan Golden Sparrows numbering several hundred. Earlier in the year I had only seen the odd birds every few visits. It is not clear whether this was a seasonal aggregation or migrating groups. There was a northward movement of gulls and terns on the river, including one large group of Lesser Black-backed Gulls. I have regularly seen Rose-ringed Parakeets flying over, but this was the first to stop and pose for the camera. 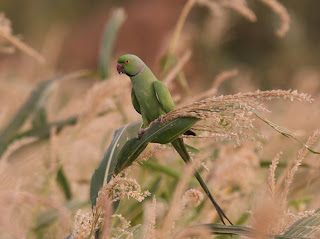