Is this a female Cinnamon Weaver?

Last week I had the good fortune to take some photos of a male Cinnamon Weaver at Tuti Island; the first photos of the species I have ever come across (maybe even the first ever taken). There were some other weavers present that seemed to be Northern Masked Weavers and no others stood out as anything different. Later, when going through my photos, I noticed that this female weaver below the male Cinnamon had a pale eye. To my knowledge, none of the weavers this far north should have a pale eye, which made we wonder if it was a female Cinnamon.

I had assumed that female Cinnamon Weaver would be quite easy given the description in Cave and MacDonald's 'Birds of The Sudan (1955) "Above, streaky brown and cinnamon with olive head and yellow eyebrow. Wings broadly edged with pale yellow. Below creamy white, rather richer on breast". However, they only show a painting of the male and I have never seen any pictures of a female. I don't see any cinnamon colouration above, nor do I see the wings broadly edged with yellow. I have never seen any reference to the eye colour of Cinnamon Weaver.

So is this bird a female or immature Cinnamon and, if not, what is it? 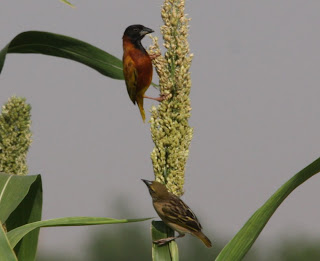 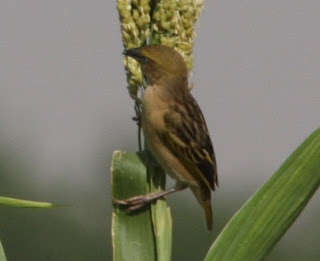 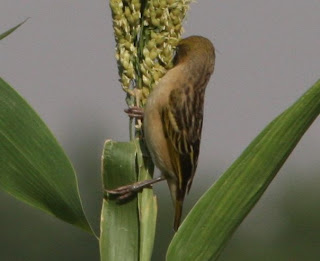 Female Weaver with a pale eye, Tuti 16th September 2011
Eye colour is clearly significant to weavers, as many otherwise near identical species have quite distinct eye colours. According to the literature, this far north in Sudan (or within reasonable striking distance) there should only be Village (Red-eye in both sexes), Ruppell's (male with an orange or red eye and female with a chestnut eye), Little (eyes brown in both), Northern Masked (dark brown eyes in both), Vitelline Masked (Red in both), and Cinnamon (eyes not mentioned in any guides). A lot further south in South Sudan (where the habitat is very different) there are several pale-eyed weavers, such as Lesser Masked Weavers (similar to the Tuti bird), Heuglin's (similar to the Tuti bird), Spectacled (very different looking), and Baglafecht (very different looking).

The difference between male and female eye colouration in Ruppell's weavers suggests that it is possible for a male and female weaver to have different eye colours. The distribution of birds in Sudan and South Sudan is little known, so I suppose Lesser Masked and Heuglin's Weavers cannot be ruled out. However, in both cases it would mean a range expansion of over 1000km and a change from sub-saharan habitats to much more arid habitats. Given that the bird was on the same stalk as a Cinnamon Weaver must make it highly likely that it is also one. They also seem to have similar dark bills and general structure.  However, it will certainly take some more observations to confirm it. Hopefully I will get further opportunities.

Any comments would be greatly appreciated. I am getting most of this stuff from books and my personal knowledge of weavers is very limited.
Posted by Tom Jenner at 23:41