There were still plenty of migrants around at Tuti yesterday when I visited with Stephen Blight, though slightly less than last week. Visible migration included a flyover group of Glossy Ibises, a group of ducks that were probably Pintail, and a Western Marsh Harrier flying up the White Nile. 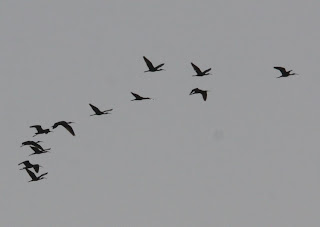 Glossy Ibises, Tuti Island 23rd september 2011
There was a slightly different mix of warblers, with lots more Lesser Whitethroats, a Common Whitethroat, several Reed Warblers and some larger Acrocephalus warblers that were probably Great Reed Warblers. There were still plenty of Willow Warblers around. One bird that had me stumped for a while was an Eastern Olivaceous Warbler. This is the common resident warbler on Tuti, so one I am pretty familiar with. I guess that this bird was a migrant and behaving a bit differently, plus it may also be a different race. It seemed to me to be slightly bulkier and with a larger bill than those I am familiar with, leading me to suspect an Upcher's Warbler. I posted the photos on Birdforum and it soon was pretty evident that it was just an Eastern Olivaceous. 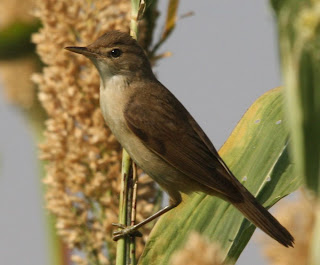 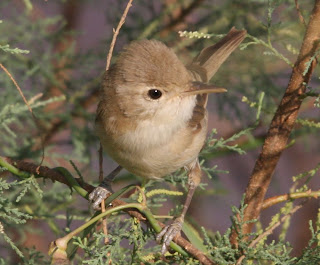 Eastern Olivaceous Warbler, Tuti Island 23rd september 2011
I was also pleased to see a group of African Skimmers, as I have only seen them in Sudan on one previous occasion. A group of 8 were flying downstream, so were presumably not migrating (Nikolaus describes them as a breeding visitor to the north, so this would have been a possibility). 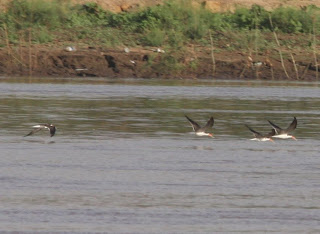 African Skimmers, Tuti Island 23rd september 2011
As we arrived back home to Araak City at the end of the morning a Rufous-tailed Rock-Thrush flew across the road in front of us. A few days earlier I had seen a Red-backed Shrike in the compound and, as mentioned in my post last week, had found a dead Quail just a few hundred metres away. There must be lots of migrants scattered around the city with Tuti Island just the tip of the iceberg.
Posted by Tom Jenner at 23:24