Jebel Aulia in May

The rains have yet to arrive in Khartoum, currently lying a little to the south. Yellow-billed Stork is a rainy season visitor to the north and Terry, Stephen and I saw our first of the season today, with 5 individuals present which were all immatures. There were big numbers of African Openbills, while other large waterbirds included a group of about 30 Great White Pelicans which took off into the thermals in the late afternoon, presumably to head north. About 10 Pink-backed Pelicans were scattered around the reservoir and showed no signs of being on migration. There were quite a few Grey Herons, several Great White Egrets and a single Little Egret. 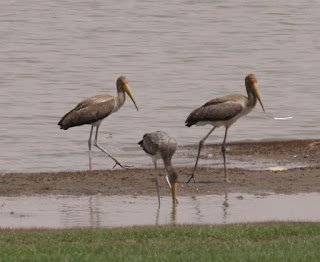 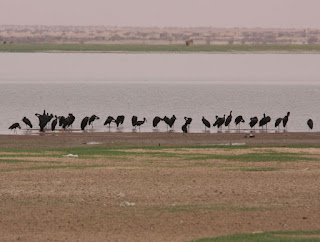 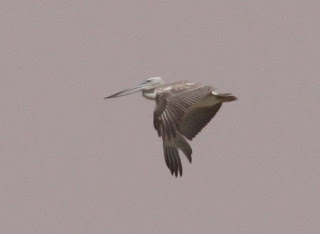 Another herald of the imminent arrival of the rainy season was the sighting of three Abyssinian Rollers, which were very vocal and quite approachable. For many species the breeding season was well under way with lots of displaying and chasing by Nile Valley and Beautiful Sunbirds. A male Little Weaver was constructing a nest, with the female nearby. It was surprising to see only a single nest, as most weavers nest colonially. Elsewhere we saw another pair, so it is not because they were the only ones in the area. Most surprising, however, were the Blue-cheeked Bee-eaters. There were quite a few flying around all day, which we assumed were migrants. But just as we were about to leave we saw one enter a hole in a bank, then leave a few minutes later followed by a second bird. This suggests they might be breeding. Nikolaus describes the status in Sudan as unknown, then refers to some old records of breeding birds from the 1850s near Dongola. Some species (such as Sand Martins) roost in holes during migration, but I do not know whether or not bee-eaters do this. I would like to check on these birds again to see if they are in fact breeding. 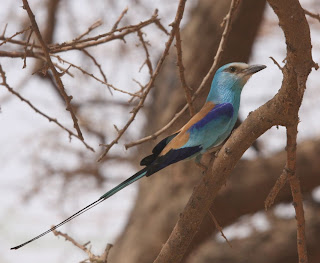 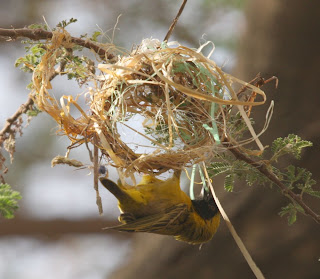 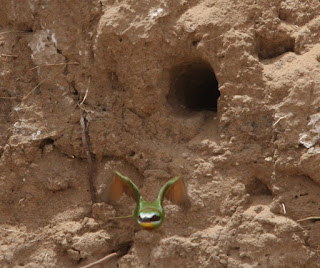 There were few migrants around, other than a couple of Ruffs that were moulting into breeding plumage, some Sand Martins, a few terns, and a Spotted Flycatcher. 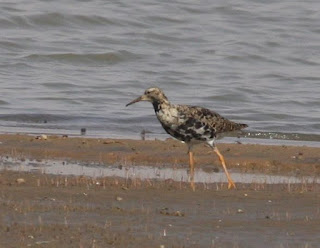