I have recently had the good fortune to be contacted by Peter Dare, who worked as an ornithologist at the Gezira Research Station at Wad Medani between 1958 and 1962. He has offered to provide some accounts of his birding experiences at various locations during his time in Sudan. It seems that travel was less restricted back then, though the infrastructure limited movements in other ways; he described the travel between Khartoum and Wad Medani taking most of a day compared to the two hour journey of today. Much of Peter's data was used in Nikolaus' Distribution Atlas of Sudan's Birds, but these accounts will be of great interest to anyone wishing to learn more about these sites that have, for the most part, not been visited since Peter's time here. As we discover more about these sites we may also have the chance to find out what changes have occurred in the intervening years. Even in his first report, below, there are a number of species that I have never seen and which whet my appetite for further exploration of this country. Tom Jenner 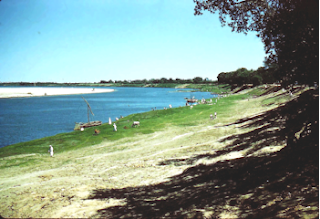 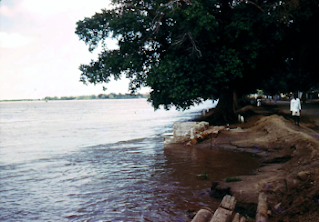 The Blue Nile flows north-west through east-central Sudan for 400 miles from the Ethiopian border before joining the White Nile at Khartoum. It is fed almost entirely by summer rains in the Ethiopian mountains. A dam half-way along at Sennar, 50 miles above Wad Medani, irrigates the Gezira cultivations. Below the dam (as here) water levels can vary by up to 10 m between the rainy season peak in early autumn and the dry season low in early summer (as shown). Falling water levels expose sand banks and silty shores which in places are utilised both by local cultivators and by many Palaearctic and African birds from October to July.