Quieter this week at the Sunt Forest

I visited the Sunt Forest again this week, with Terry and Chris Wood. There were still plenty of birds about, but certainly fewer that last week. This was particularly the case on the shallow pools beside the road near where you enter, where numbers were much less. One explanation might be that as the White Nile falls it exposes more mud, providing more suitable habitat for waders to feed, though there may be other explanations. The only bird of note on the pools was a Common Redshank; an uncommon species inland in Sudan and not seen the previous week. Other species were similar to last week, though generally in smaller numbers, though 28 Senegal Thick-knees was probably slightly more than on our last visit. 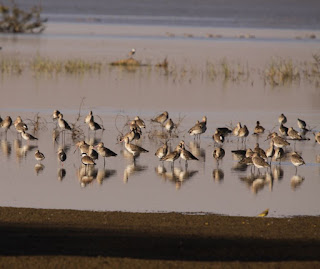 The forest was drier, allowing us to approach the birds on the flooded fields on the far side more easily. The water now reached up to the edge of the forest allowing us to approach quite closely while still partly concealed. We had seen a few Spotted Redshanks here last week, but this time there was a group of about 30 birds feeding together in a close flock. There were also about 150 Black-tailed Godwits, a few other wader species, and about 50 ducks, including Eurasian Wigeon, Gargany, Common Teal, Northern Pintail, and Northern Shoveler.  Once again, there was little on offer in the forest, though we did have our first sighting here of a couple of African Grey Hornbills. Another notable sighting was of a couple of African Skimmers that flew past along the edge of the river.