Over the Eid holiday we went scuba diving on a boat out of Port Sudan. We drove down and back rather than fly and this gave some interesting bird observations but did not allow for any protracted birding.

We stopped for lunch at a dry wadi with culvert under road (lat:17.759930o Long:34.327850o) about 40 km west of Atbara. There were a few scattered thorn bushes on the banks of the wadi and some drying, but still green, short grass. Found Two White Wagtails and a Southern Grey Shrike with a very pale bill, taken to be L.m palldirostris. Interestingly there were a number of dead birds lying about, possibly as many as 10. Most were relatively whole but with missing heads. There was also one intact, but dead, Red-backed Shrike. These birds may have made it to this spot exhausted after crossing the desert, attracted by the bushes and the grassy patch, but found there was both insufficient food or water and simply died there. I suspect that the missing heads may have been caused by rats or other rodents scavenging on the dead birds.

At Haiya we saw the usual Fan-tailed Ravens, Black Kites and a Pied Crow. Also saw 2 Egyptian vultures there on the drive down; on the drive back we saw 4 Egyptian Vultures, including one juvenile. These numbers were down from last year when we saw 14 of these vultures in the vicinity of Haiya.

West of Sinkat the road splits (lat:18.892514o long:36.863329o)into two one-way roads through the mountains. The road runs through a steep-sided rocky gorge most of the way with little in the way of vegetation.  Driving through late in the afternoon we recorded two 4-banded Sandgrouse and 3 White-crowned (Black) Wheatear.

The next day we joined the boat and set off for 4 days at sea. Throughout the trip we had various northern migrants landing on the boat often looking to be in a state of exhaustion and presumably many of these would not have made it to land. One Barn Swallow that landed on the boat at dusk died during the night. On several occasions I saw barn swallows drinking from the sea – it was very calm for most of the voyage. 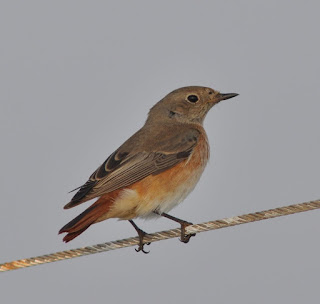 Common Redstart, Red Sea October 2012
One sighting of especial interest was an owl! I had just come back from a dive when we all saw an owl circling the boat as we were setting off to the next dive site. I did not have a camera on deck but had a good sight of the owl as it circled the boat and then followed in our wake about 50 metres back from us. This was about 3.00pm. The crew said they regularly see owls at sea where they (the owls) catch fish. They said that the owls “live on the lighthouses”. It was difficult to be certain of an ID without a photograph, but the size, colour suggested that it was a Pel’s  Fishing Owl.  Nikolaus does record the Pel’s as “rare, possibly overlooked. It has also been recorded elsewhere in mangrove swamps.  It has been suggested to me that this could have been a Short-eared Owl, but, although this makes more sense, they have been recorded crossing the Red Sea and settling on ships in the Red Sea, the colour and size seemed wrong. But possibly this was an artifact of the bright afternoon light reflected back off the sea. Any other suggestions from readers would be welcome.

On the return drive back we stopped overnight at the hotel at Erkowit. With all the watering in the garden it was a little green oasis that attracted a small number of birds. We recorded  Crested Larks, Blackcaps, White wagtails and Red-throated Pipits.  In the lookout point at the end of the dirt road we recorded 2 more White-crowned Wheatears.