Another visit to the pools near Capo Dairy

I made another visit to the pools this evening. Once again there were lots of Hottentot Teals (some of which gave the impression of being in pairs), with perhaps 15 in total. I only saw one African Purple Swamphen, but lots of Common Moorhens. The Three-banded Plover was still present in the same area and was behaving as if it had a nest nearby. This would be very out of range and unexpected, but I will keep my eyes on this to find out what is happening. There is the very real chance that there could be up to four species (Hottentot Teal, African Purple Swamphen, Common Moorhen, and Three-banded Plover) breeding at these pools that are not known to breed in Sudan, and have rarely even been observed (more so the Moorhen).  Needless to say I will need to get proof, and I have every intention of taking time to document these birds properly over the next couple of months. 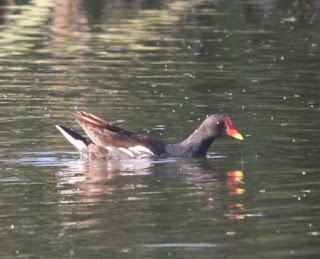 Common Moorhen, Pools near Capo Dairy 13th April 2012
last time I visited I noticed a sizeable roost of Northern Masked Weavers building up in the pool with the thickest reeds. Today I was there right up to dusk and saw that the roost did not only involve birds from the pools themselves, but also flocks from the surrounding area. There also appeared to be many other species joining the roost, and through the fading light and thick reeds it was possible to identify several Sudan Golden Sparrows, some Northern Red Bishops, a Red-billed Quelea, and what appeared to be a moulting Cinnamon Weaver. The latter is of particular interest as so little is known about them. The bird had a patch of cinnamon coloured feathers on the neck and seemed to be moulting in a dark hood; the shape and marking also look about right, but I still cannot be certain until I see more. Hopefully they will soon be in full adult plumage and it will be possible to know for sure. 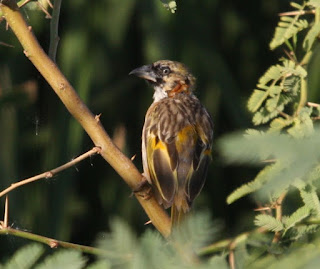 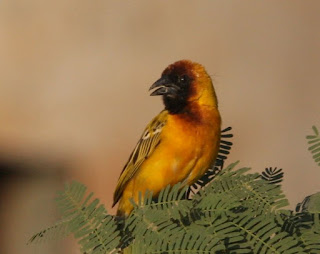 Northern Masked Weaver, Pools near Capo Dairy 13th April 2012
Most spectacular, though much more expected, was this Purple Heron which circled several times after being flushed from the reeds. Another interesting sighting was a group of about 10 Wattled Starlings that flew over the pools. 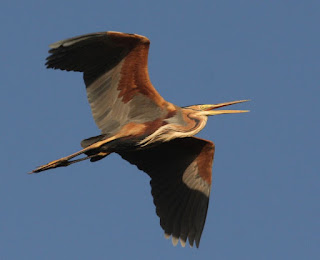