Ringing report by Chris and Esmat

Ringing on um Shugeira, March 2012 – Chris & Esmat
Between the 28th March and 1st April the two of us (Chris and Esmat) returned to um Shugeira Island in the Blue Nile in Khartoum for a second ringing expedition to follow up on our first in January. Water levels had dropped slightly since January but ringing conditions were much the same although there was less wind overall except for the first night when it was quite strong. In total 172 birds were ringed comprising 15 species. This gave us a grand total of 414 birds ringed for the season, a reasonable total but one that we can hope to improve upon next year. Now what we need is some recaptures from Europe! 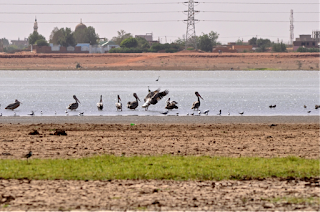 Looking toward Omdurman from ringing camp
As before, we kept the nets open 24 hours a day and managed to catch and ring a reasonable number of waders. As before we were surrounded by Ringed Plover on the dried mud near where we were camped, and as before we were frustrated in our attempts to capture any. Again we failed in our attempts to capture any Black-tailed Godwit. In January Curlew Sandpiper had been common and we had ringed a number. This time only a handful was seen and none were captured but Little Stint remained common and a number were ringed.
Two species that were especially numerous were Ruff and Whiskered Terns. In January we ringed a number of Whiskered Terns but only a couple of Ruff. This time we ringed 123 Ruff but no terns at all!
The Ruff were almost all female, only 2 males were captured and ringed, and good proportion of those were first winter birds still with green to brownish green legs.
The sexes of the Ruff normally overwinter separately with the males tending to overwinter closer to Europe so that the further south you go on the African continent, the lower the proportion of males. In South Africa this may be as low as 1:12 to 1:15 males to females. However, this cannot explain the huge discrepancy here and this is more likely to result from males having returned to the breeding grounds to establish their lekking territories. 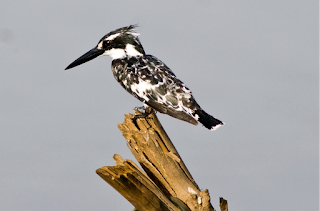 Pied Kingfisher, Um Shugeira
One interesting occurrence was the ringing of a Senegal Thick-knee. On the last morning I noticed two birds in the net nearest our camp and started toward them.  As I did so the one bird started struggling and in so doing stretched the net and bounced itself into the water. I ran to the net and was there within half a minute, but it appeared I was too late. The Thick-knee lay apparently dead in my hand, its neck flopping loosely. I thought this was surprising but I took it back to the camp and we decided to keep it as the department could stuff it and mount it in a display. We wrapped it in a plastic bag for safe-keeping. Sometime later we heard sounds of scratching and struggling from in the plastic bag. We opened it and found a very much alive Thick-knee. It seems to have been feigning death! We immediately ringed and released it. It flapped its wings a couple of times to check that all was in working order, and then stalked off in what we felt were rather disdainful looks in our direction.
The lone Willow Warbler was captured in entirely unsuitable habitat and it was presumably either migrating north or simply crossing over the Blue Nile from one side to the other.
Overall species richness was higher than in January with 58 species recorded during our stay compared with 33 species during last January. Also waterbirds abundance was higher this time with 5706 birds compared with 4576 last January.
Posted by Tom Jenner at 00:59