Some migrants at the KICS stables

I made my regular short trip to the riding stables yesterday, and while my son was riding I had a chance to check the birds by the Blue Nile. Most waterbirds had left, but there was still a single Little Stint and one Temmink's Stint remaining on the shore and single Whiskered and White-winged Terns feeding over the water. There have been some hirundines around for a while, but most noticeable today was a number of House Martins which is a species I see less often than the other migrant hirundines. 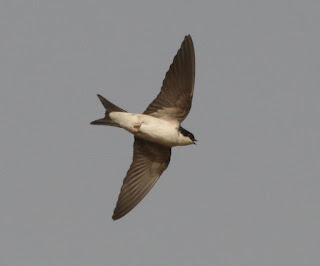 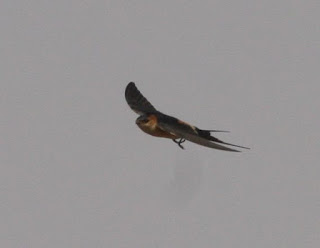 Red-rumped Swallow, KICS Stables 22 April 2012
Wagtails are renowned for being early migrants, and by my last visit to Tuti Island it was noticeable that they had gone. I was therefore surprised to see at least 6 Yellow Wagtails still present on the grass at the stables, plus a White Wagtail by the river. There were several unidentifiable female birds and one obvious male of the feldeg form (Black-headed Wagtail). The most common form here in Sudan is beema (Sykes's Wagtail), but the ones in the photo below looked a little bit different to normal. They both had quite a long white supercilium and very little white on the ear coverts. Had it been a single bird I would have put it down to individual variation or hybridisation, but it was odd to see both birds appearing this way. 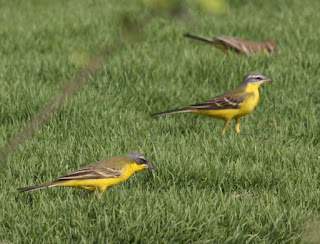 Yellow Wagtails, KICS Stables 22 April 2012
Wheatears have also mostly left by now, but there were still single Pied and Northern Wheatears present. There have been a lot of European Bee-eaters around the city recently, so it was no surprise to see a big group pass through today. There was also a flypast of a group of Wattled Starlings.
Posted by Tom Jenner at 23:11